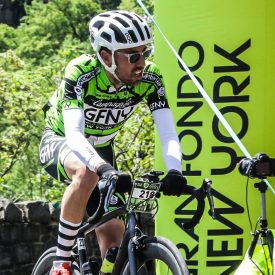 Plowells admitted to having used the substance, which is banned under WADA rules. He is disqualified from the race and receives a lifetime ban from all GFNY events (Rule 9.3).

This is the fifth positive doping control in GFNY’s short history.

“Five positive tests in six years of testing may seem a lot for an event where the majority are amateurs,” says GFNY CEO Uli Fluhme. “It’s simple though: you can’t catch cheaters if you don’t perform doping controls. And unfortunately most races still don’t test sufficiently or at all.”

“We don’t allow course cutting at our races so why would we look the other way when it comes to doping? GFNY riders train hard for races. They deserve a fair competition. We owe them controls, even if the costs are well over $10,000 each year. Not testing the athletes is the worst decision that a race director can make because it forces everyone to take drugs to try to level the playing field.”

GFNY established doping controls in 2012 and is the first event open to amateurs that also institutes out of competition tests. In 2012, David Anthony (NYC) and Gabriele Guarini (Italy) tested positive for EPO at GFNY after winning their respective age groups. In 2015, first overall finisher, Oscar Tovar (Colombia), tested positive for Testosterone, as did Yamile Lugo (Colombia), who came third in the women’s race.

In addition to a lifetime ban for dopers at GFNY races, the race’s rules also state that a rider who tests positive at GFNY has to reimburse the cost of the doping test. Furthermore, such rider has to reimburse GFNY for any damages to its reputation that are a consequence of the positive doping control. If the rider is part of a team participating at GFNY, the team can be held liable for this damage [GFNY rules].

A rider who is currently banned by WADA from competition may not participate in any GFNY event. After the ban, he/she is allowed to participate but has to start at the back of the field, will not be timed and will not be in the results. This allows for social reintegration despite a lifelong ban from competing. Several riders have taken part in GFNY over the years in this way.

Checking for Motors in Bikes

Since 2015, GFNY also randomly checks bikes for motors. Current technology allows to invisibly integrate inaudible motors into the frame that produce up to 250 Watts for 30 minutes which increases a top rider’s output by more than 50%.

Main Focus Remains on Providing a Great Experience for All Riders

“Competitive sport at the top is important to us and has its place, which is why we take it seriously,” adds GFNY President Lidia Fluhme. “That said, our main focus remains on providing a superior experience for all GFNY participants, especially those for whom it is a lifetime goal to do their best on a challenging course. A race for elite riders requires police support with just a 15 minute rolling closure. At GFNY, however, we ensure hours of closures and right of way for anyone who takes on the challenge.”