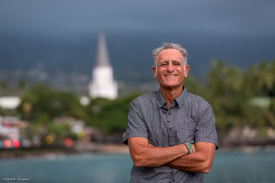 UCAN is delighted to announce a partnership with the storyteller of the endurance world, Bob Babbitt. For over 40 years, Babbitt has been telling stories as a means to inspire triathletes, runners and athletes of all kinds. Together, UCAN and Babbitt look to bring life to UCAN’s many stories and UCAN Moments.

“As someone who loves cool brands, I loved the name UCAN right from the start,” says Babbitt. “Then Meb Keflezighi, America’s greatest marathoner, started training with the product and having great results as did many triathletes and cyclists. I love the brand, the way they operate as a company, and the story behind it, and I’m thrilled to have the chance to spread the word about UCAN on our Breakfast with Bob shows and Babbitville Radio.”

UCAN was originally created for a purpose – to provide energy for a child with a rare condition that prohibits the body from producing its own blood sugar, resulting in frequent and dangerous episodes of hypoglycemia. Out of this need came SuperStarch®, a patented, complex carbohydrate that delivers steady, long-lasting energy with no spikes and no crash. After conducting clinical trials on athletes, who also need to work to manage their energy levels, UCAN launched nutrition products powered by SuperStarch® in 2012.

“Working with Bob is a perfect fit for UCAN, a company that uses storytelling every day to convey how we came to be and why we are a compelling choice to serve athletes’ nutritional needs,” said Shoba Murali, CEO of the UCAN Company. “Through Bob’s amazing ability to captivate an audience, we are excited to spread the word about the breakthrough in carbohydrate technology that is SuperStarch.”

Bob Babbitt is widely known in the triathlon and running communities for co-founding Competitor Magazine, his show Breakfast with Bob that airs live from major triathlons and marathons, for his podcast Babbittville Radio, and for the Challenged Athletes Foundation, which he co-founded in 1994. Babbitt was one of the first athletes to compete in IRONMAN in only its third year, and through his tireless efforts to grow the sport, he was inducted into the USA Triathlon Hall of Fame and IRONMAN Triathlon Hall of Fame. Babbitt provides endless entertainment and captures audiences with his charisma and stories.

UCAN delivers smarter energy powered by SuperStarch®, a patented, slow-releasing complex carbohydrate that delivers steady, long-lasting energy with no spikes and no crash. Originally created for a child with a rare metabolic disorder, UCAN Energy Powders and Energy Bars with SuperStarch® are the go-to nutrition for over 80 colleges, 40 pro teams, Olympic marathoners, elite triathletes, cyclists, thought leaders in health and performance, and everyday athletes looking for steady energy without all the sugar. UCAN is a company built on purpose and passion. Learn more at generationucan.com and get the latest buzz in the UCAN world @GenUCAN on Twitter, Facebook, and Instagram. UCAN nutrition products are currently available in powder and bar format, in a variety of flavors, at 350+ specialty run, bike and tri stores around the country and also can be purchased online on the UCAN website and on Amazon. #UCAN

Do Runners Need to Wear Masks?