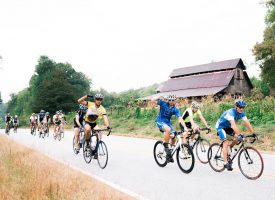 DAHLONEGA, GA. (April 18, 2019) – – Early registration is underway for one of the most popular bicycle rides in the country,  the Six Gap Century & Three Gap Fifty.  Participants can save $10-20 by completing the online registration by May 31. Among sponsors to join the weekend of festivities, Sept. 28-29, 2019, are Northside Hospital Sports Medicine, SunTrust and Chestatee Ford.

The Six Gap Century’s challenging 104-mile route has become a bucket-list ride for cyclists from all across the U.S., which features 11,200 vertical feet of elevation gain across six of the steepest climbs in the North Georgia mountains. The toughest climb on the century, Hogpen Gap, averages a gradient of seven percent for 7 miles, with sections as steep as 15 percent.

The Three Gap Fifty offers a 58-mile course with 6,385 vertical feet of climbing. The 35-mile Valley Ride will return for a ninth year and offer a scenic mountainside route with rolling hills to Turner’s Corner and back.

There is one standard fee for all three ride options. The Early Bird fee is $66 and the standard fee of $76 will take effect from June 1 to Sept. 22. Each registration includes a custom T-shirt, snacks and beverages at rest stops, showers, and a post-ride spaghetti dinner (from 11am-6pm). Online registration will end Sept. 22, or when the 2,500 rider limit is reached, whichever occurs first. If spots are available, on-site registration will take place Sept. 28-29 and the fee will be $86. Fees are nonrefundable and the rides will take place rain or shine. Visit the web site for details – http://haku.ly/3ede1e6e.

This is the first year for Northside Hospital to sponsor Six Gap Century & Three Gap Fifty, noting that mobility is one of the most important aspects to living a longer and healthier life. It is also the first year for SunTrust to support the event. Chestatee Ford returns for a sixth year as a sponsor. SunTrust has a branch in downtown Dahlonega, which provides a full range of banking resources and services. Chestatee Ford is a hometown dealership for new and used vehicle sales, as well as parts and service.

Returning in 2019 will be King of the Mountain and Queen of the Mountain designations for the top male and female climbers on the Three Gap Fifty course. The KOM and QOM honors will be awarded based on lowest climb times on Wolfpen Gap. For the Six Gap Century and Three Gap Fifty, honors are recognized for the lowest combined climb times on Hogpen Gap and Wolfpen Gap in three age categories , 34 & under,  35 to 54, and 55 & over. Winners receive custom KOM kits (jersey and bib shorts).

The Six Gap Century & Three Gap Fifty will continue to support Georgia Bikes, a non-profit organization working to improve bicycling conditions and to promote bicycling throughout the state of Georgia. One dollar of every registration will be donated to Georgia Bikes to increase bicyclist safety through education, outreach, and better streets and trails.

The 2019 Bike Expo will be held on the Historic Square of Dahlonega on Saturday, Sept. 28, from 9 am to 6 pm. Vendor booths from leading industry companies and Six Gap Century sponsors will offer interactive displays, special  merchandise, and product samples. Pre-registered Six Gap participants can also check-in for Sunday’s ride on the Visitors Center plaza during the Expo. Plans for the Six Gap Criterium on Saturday will be announced later this summer.

The Dahlonega-Lumpkin County Chamber & Visitors Bureau owns and operates the Six Gap Century & Three Gap Fifty, as well as the Bike Expo. The Six Gap Century & Three Gap Fifty boasts many of the same roads and mountain climbs that were conquered during the Tour de Georgia professional stage race. The Six Gap Century’s ultra-challenging route features six of the steepest climbs in the North Georgia mountains. It is the largest participant event of the year for the organization, which grows the economy, attracts visitors, advocates for all businesses, and develops leaders to promote the welfare of the community.

Six Gap By The Numbers: