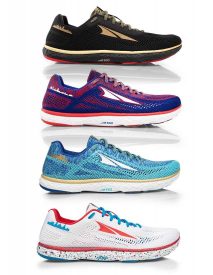 (Logan, UT – March 4, 2019) Altra continues its popular city-inspired Escalante Racers with a new Boston version for 2019, and expands its international line with London, Paris and Tokyo.

The Altra Boston Escalante Racer is back with an amazing updated colorway. The new Boston Racer has a blend of light and dark blue, tied together with gold lining. The outer heel collar features a golden skyline of Boston which includes Bunker Hill Monument, Old North Church, Old State House and the John Hancock Tower. The inner side of the shoe highlights the year with a white “19” and the city with a gold “Boston.” Available now.

The Altra London Escalante Racer comes in a red, blue and white colorway reminiscent of the British Flag. The laces feature a unique speckled blend of the three colors. The outer heel collar calls out unique landmarks of the London skyline like Tower Bridge, the London Eye, Big Ben and Buckingham Palace. To commemorate the year, the medial side features a “19” along with “London” to highlight the city. Available now.

Coming late March is the Altra Paris Escalante Racer. The Paris racer will feature a different mix up of a white, red and blue colorway, along with a multi-colored speckled midsole. The blue skyline on the heel shows off famous Paris landmarks like the Eiffel Tower, the Arc de Triomphe, the Louvre and Notre Dame. The medial heel has a red “19” to specify the year and a blue “Paris” to highlight the city.

Still available in limited quantities is the Altra Tokyo Escalante Racer. The Tokyo Racer highlights a gold skyline silhouette on the outer heel collar and golden midsole racing stripe with a jet black upper. On the shoe’s medial side, Japanese brushstroke lettering pairs “Tokyo” with a large “19” to highlight the year.

The Escalante Racer is Altra’s faster, higher performance version of the award-winning Escalante. The upper is firmer, highly breathable and has a lighter heel counter for optimum cornering and comfort on the race course. To top it off, the Altra EGO™ midsole is a touch firmer for a little more energy return and a little less cush. The Altra Escalante Racer is only available in limited edition versions inspired by major cities and is only available surrounding their respective marathons.

Check out all of Altra’s Escalante Racers retailing for $140 on www.AltraRunning.com or at select specialty running retailers.