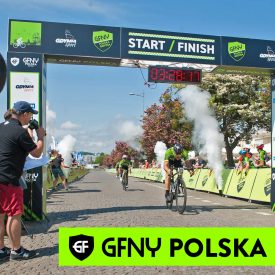 Just 10km from the start was the toughest climb of the day that took riders through the lush green hills and forests of the Kashubia region. A leading group of 27 made it to the first checkpoint at 20km followed less than a minute back by a further group of 50 riders.

The rolling hills of Kashubia encouraged numerous breakaway efforts. Finally, after 50km Matthias Van Aken of Belgium decided to try his luck and was successful. He was followed by Nestor Salinas (CHI), Tobiasz Kulikowski (POL) and Szymon Kufel (POL), forming a breakaway group of four.

After riding down back to the city, Aken struggled to keep pace and was dropped from the group.

In a close sprint finish, Kulikowski pipped Salinas, crossing the line in 3:28:30. Kufel rounded out the podium in third.

Two Eastern European riders, Viktoria Bolshakova (RUS) and Svitlana Chebanenko (UKR), dominated the women’s race. Both took an early lead with a 3.5 minute gap ahead of their rivals at 37km. Bolshakova broke away from Chebanenko in the second half of the race and continued to build her lead and crossed the line seven minutes ahead of Chebanenko in 3:40:20. Monika Sawa of Poland (Decathlon Strong Team) completed the podium in third.

Podium finishers and a few others were tested for prohibited drugs, a first in Poland for a mass participation cycling race. With this, GFNY continues its strong stance in anti-doping.

“Gdynia is a fantastic location,” said Lidia Fluhme, President and co-founder of GFNY. “This course is beautiful and safe, because it’s fully closed-to-traffic. Green forests, rolling hills, lots of people cheering you on and sunny weather, what else do you need? We are more than happy to have Gdynia on the global GFNY event map.”

Next up is GFNY Brasil on August 5.