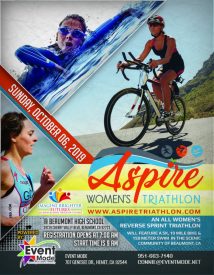 Producers of the 34th Annual Tinsel Triathlon, and Event Mode have set into motion the Aspire Women’s Triathlon.  Event Mode is an event production company comprised of a team of folks with an extensive history or working together. The Aspire Triathlon is a competitive reverse sprint pool triathlon that will be staged at the beautiful Beaumont High School Campus in the City of Beaumont.  The reverse sprint model starts with a 5K run, a 10-mile bike, and finishes with a 150-meter swim in a heated pool.

Event co-producer Connie Hall, and owner of the 34th Annual Tinsel Triathlon, has a unique passion for the City of Beaumont.  As a former Beaumont business owner and past board member of the local chamber of commerce, she grew to love the heart and character of this quaint, rapidly growing community. “I’d like to think we are bringing the City a signature event; one that both highlights Beaumont to a broad audience and will attract a large portion of its participants from out of the area,” stated Hall.

A longtime mentor of Hall’s, Bob Babbitt, a triathlon production expert, states that “Connie Hall and her team have been putting on California’s longest running pool triathlon, The Tinsel Triathlon, for over 18 years.  If you’ve always wanted to try a tri, what are you waiting for? If Connie Hall is putting on the race, there is no doubt it will be great!”.  Babbitt is in the Ironman Hall of Fame, USA Triathlon Hall of Fame, founder of Competitor magazine, co-founder of Challenged Athletes Foundation, and host of Babbittville radio.

Co-producer and longtime non-profit executive Bob Duistermars brings many years of experience to the endurance sporting event production to the team. With his calm management style and 20 + years of race production experience, he keeps the Event Mode team inspired and on task. His work also generated a beauty of a course for our competitors to conquer.

USA Triathlon Level I Certified Coach Marc Moné is the official triathlon coach for the inaugural Aspire Women’s Triathlon. Marc comes on board to aid us in the growth of the sport of triathlon.  Moné asserts that “athletes who work with a coach are more likely to see greater progress and goal achievement than athletes who train on their own.”

A passion of the Aspire Women’s Triathlon team is growing the sport by creating ever-increasing opportunities for triathletes to test and better themselves in safe, competitive races. The Aspire will provide an excellent opportunity for women who want to become triathletes due to the use of a pool, as opposed to the ocean. It’s also a beautiful setting and competitive course for the seasoned female triathlete.

For more information, see us online at WWW.ASPIRETRIATHLON.COM

To learn more about the Event Mode team, see us here: http://eventmode.net/about.htm

View all Releases by tinseltriathlon

Russia banned from Olympics, world champs for 4 years; athletes could compete as neutrals

Exercising 3 hours a week may lower your depression risk