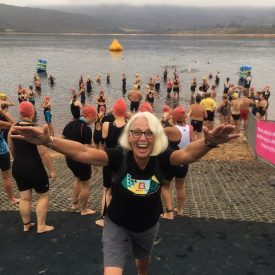 Clark was a founding member of the team who produced the inaugural XTERRA triathlon in 1996 on the island of Maui, and a dynamic contributor in its evolution from a one-off event into an endurance sports lifestyle brand.

Born and raised in Canberra, Australia, Clark was a founding member of the team who produced the inaugural XTERRA triathlon in 1996 on the island of Maui, and a dynamic contributor in its evolution from a one-off event into an endurance sports lifestyle brand.

Affectionately known worldwide as the “XTERRA Momma,” Clark has been the most beloved and visible member of the XTERRA organization through the years and is widely credited for developing the friendly atmosphere and culture of inclusion XTERRA is known for.

She is also celebrated for her business acumen, creative spirit, outgoing and jovial nature, keen sense of humor, ridiculous hats, boisterous laugh, and above all – her genuine concern and care for every participant, crew, and community member she met.

“Janet has been the heart and soul of XTERRA for so many years, she is simply irreplaceable,” said J-D Cousens, XTERRA VP of Operations & Global Marketing. “We’ll never be able to thank her enough for her contributions to the brand, her positive influence on our lives, and for positioning XTERRA for continued success.”

Prior to joining XTERRA, Clark was honored as the Advertising Woman of the Year while at Ogilvy and Mather Hawaii, and brought 25 years of media and marketing experience to the brand.

“I have been fortunate to have spent the past 28 years producing and marketing events and to have built a globally recognized brand alongside a truly talented and dedicated crew,” said Clark. “I’m so grateful for the love and support of the XTERRA Family who have enriched my life, and I look forward to watching everyone flourish for years to come. Right now, however, it’s time for me to enjoy this next phase of life which involves spending time with my parents in Canberra, and a whole lot of gardening in my backyard on the Big Island!”

XTERRA is a global lifestyle brand that champions the outdoor endurance enthusiast in their pursuit of relentless adventure. With over 25 years of rich, off-road history,  XTERRA has cultivated a passionate community of like-minded individuals who strive to be the best version of themselves in all aspects of life.  XTERRA offers partners a globally diverse community of loyal consumers who connect through sharing experiences, victories, struggles, personal stories, adventures, and much more.