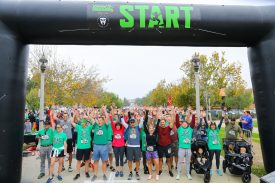 Inspired by U.S. Navy SEALs (Frogmen), the Joggin’ for Frogmen 5K activates communities nationwide to honor the sacrifices of Naval Special Warfare (NSW) service members and to support families of the fallen within the community. The event was created following the Extortion 17 tragedy on Aug. 6, 2011, when 31 U.S. personnel were lost in a helicopter crash in Afghanistan, marking the single largest loss of life for U.S. forces in Operation Enduring Freedom and in the history of NSW.

All funds raised through the JFF series benefit surviving families of the NSW community connected to Travis Manion Foundation. TMF’s best-in-class personal development training and experiences allow survivors to find healing and honor their loved ones through service, including opportunities to serve as mentors to youth, forge connections with one another, and experience opportunities for personal growth.

The first Joggin’ for Frogmen 5K was held in San Diego in 2012. Since then, the event has expanded to shadow race locations across the United States and has incorporated an annual Extortion 17 virtual run for participants nationwide. Each in-person event in the series also includes a Tadpole Trot kids fun run.

Registration includes custom finisher’s medals for all participants, chip timing and bibs, custom patch (for rucking participants) and a race t-shirt. A Virtual Runner registration option is available for participants who can’t attend a race in-person. To get involved, sign up for a race, become an individual fundraiser, or start a shadow race by visiting www.jogginforfrogmen.com.

Travis Manion Foundation (TMF) unites communities to strengthen America’s national character by empowering veterans and families of fallen heroes to develop and lead future generations. In 2007, 1stLt Travis Manion (USMC) was killed in Iraq while saving his wounded teammates. Today, Travis’ legacy lives on in the words he spoke before leaving for his final deployment, “If Not Me, Then Who…” Guided by this mantra, veterans continue their service, develop strong relationships with their communities, and thrive in their post-military lives by serving as character role models to youth. As a result, communities prosper and the character of our nation’s heroes lives on in the next generation.

The story of 1stLt Travis Manion and his Naval Academy brother LT (SEAL) Brendan Looney have been publicized in the book Brothers Forever, and additional information about the Foundation can be found at www.travismanion.org.