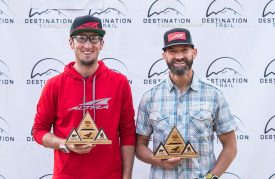 Even more astounding is McKnight’s medical history: five years ago, he broke his back in a skiing accident and was told he’d never run competitively again.

“I broke my back just as I started getting into and really loving running,” said McKnight, Altra’s Event and Sponsorship Manager. “I had two rods and nine screws put into my spine, along with a bone graft from my hip. I was told I’d be bedridden for months and would be lucky to run again, but that inspired me to get back out there and I ran a 10k race six weeks later with my body brace on. Thanks to this experience, my passion for ultrarunning grew and now I’ve run three 200-mile races in two months, something I thought I’d never physically be able to do.”

McKnight and Light, both natives of northern Utah, approached the possibility of running the Triple Crown very differently. After running a handful of ultras, McKnight signed up for Bigfoot 200, his first ever 200-miler. After a strong seventh place finish, he said he was happy to have endured a 200-miler and that would complete his racing year. But a day later, like most runners, he forgot the pain and signed up for the two additional 200-mile races of the Triple Crown, just four and eight weeks later. Light, however, ran four 200-mile races prior to his decision of competing in the Triple Crown of 200s this summer. The two men, having never met before the first race, became fast friends and helped push each other at each event.

Below, McKnight and Light gave some tips on what they did to be in top shape and ready for racing hundreds of miles in back-to-back-to-back events.

Though McKnight and Light are well matched competitively, their training methods were different. McKnight focused on time, spending 2 hours on the trails every morning before work, 3-6 hours of intense trail running on Saturdays and weightlifting every day at lunch. Light focused more on mileage and strength training, running 55-75 miles weekly through a mix of trail running, treadmill workouts and 20-mile adventure runs on Saturdays along with strength training. Sundays were rest days for both men.

Both McKnight and Light follow strict diets to keep them lean and race ready. McKnight follows a low carb, high fat (LCHF) ketogenic-style diet getting most of his carbs from veggies, fruit and sweet potatoes, along with moderate protein and lots of good fat intake. He also uses strategic intermittent fasting to optimize his fat metabolism. The benefit of this diet for endurance racers is training the body to tap into its own fat during races as a fuel source. His go-to electrolyte drink was X-Endurance, while his aid station fuel was a variety of bacon, cheese quesadillas, berries and heavy whipping cream, almond butter, apple sauce and jerky. Light’s diet focuses on increased servings of plant-based portions coupled with 1-2 servings of lean protein such as chicken or fish. He also eliminated dairy-based products, breads, pastas and processed sugars. To stay fueled during the race, Light used Glukos supplements and his go-to aid station foods were hamburgers, mashed potatoes, avocados, bacon and ramen. For electrolytes, his drink of choice was Skratch Labs.

Challenges During the Races

McKnight had significant stomach issues at Bigfoot 200. He was constantly vomiting and couldn’t keep down any food or water for over 100 miles of the race. Then at Tahoe 200, he had extensive leg pain to the point of barely being able to walk.  Despite these issues, he attributes sleep to helping him survive.

“Sleep is crucial,” McKnight said. “I only slept 45 minutes total at Bigfoot 200, but four hours at the second race, Tahoe 200.  I was psyched to improve my finish time at Tahoe even with sleeping longer.  As much as you’ll want to push through the sleep to save time, don’t.”

During Tahoe 200, Light had an inflamed anterior tibialis on both shins around mile 140 to the finish, making it hard to walk, let alone run. He described the pain as a hot branding iron being continuously pressed into his shin bones. At Moab 200, Light ran out of water early on in the race and experienced dehydration vomiting and developed an inflamed nerve on his bottom right foot, called Baxter’s Nerve Entrapment, that caused pain with every step. Even with all of these challenges, he remained positive.

“Know and understand that every race probably will not go as planned for you and your competitors,” Light said. “If you get sick or have digestive issues, don’t get discouraged. It is a long race and you have time to recover. Learn to adjust and never give up.”

To keep his feet fresh, McKnight constantly switched up shoes during all three races. He wore the Altra Timp, Altra Paradigm, Altra Torin, Altra Escalante, Altra Lone Peak and Altra Olympus. Light swears by the Altra Paradigm, having used this shoe for his trail races the past few years. However, for water crossings and to switch up cushioning, he used the Altra Timp.

Ultra runner Candice Burt is the creator of Destination Trail which includes the first single loop or point-to-point 200-mile foot races in the United States. Since its founding four years ago, her 200-mile races have seen consistent growth, with participation doubling this year at Bigfoot 200, Tahoe 200 and Moab 200.

“200 miles is becoming the new ‘weird’ that 100s used to own completely,” Burt said. “Many people still think that 100 miles is crazy and extreme. However, 200 is new territory to explore for runners who want to renew the excitement that 100 milers used to inspire within us.”

Burt frequently uses the hashtag #200isthenew100 on her Instagram.

While working at a running store, Altra founder Golden Harper was frustrated that modern running shoe technology caused poor running form and had not decreased running injuries. His passion to create a shoe that followed the science produced Altra’s FootShape™ toe box and Zero Drop™ platform. Since its founding in 2011, Harper and co-founder Brian Beckstead have grown Altra from one to 25 shoe styles, winning multiple Editor’s Choice awards and distribution in more than 60 countries. Join the conversation @AltraRunning and #ZeroLimits on Twitter, Instagram and Facebook.

View all Releases by Colleen

Runners face potential contract reductions for failing to race in 2020