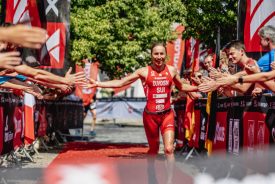 August 11, 2022/ENDURANCE SPORTSWIRE/ – The pinnacle event on the 2022 XTERRA European Tour takes place this Saturday, August 13, in Prachatice, as the Czech Republic plays host to the European Championship race for the second time.

This is the 18th year of XTERRA racing in the Czech Republic, which produced its inaugural event in 2002, and for the ninth time all the action will unfold in the southern Bohemia village of Prachatice, a picturesque medieval town about two hours south of Prague.

The XTERRA European Championship is the first of four big events in seven days awarding €50,000 in prize money to the sport’s top elite athletes who have flocked to central Europe for the contests.

The top 20 finishers from Saturday’s race will then advance to Sunday’s televised XTERRA Short Track event, along with a handful of wildcard selections. Then, next week, August 19-20, the action moves to Zittau, Germany for XTERRA Short Track on Friday, and the full-distance race on Saturday.

“I’m ready for four races, and will give everything I’ve got in each one,” said Serrieres, the undisputed favorite from Montpellier, France, who proved he can manage multiple events on short rest when he won XTERRA Lake Garda, the World Triathlon Cross Championships in Romania, and XTERRA Belgium in a span of seven days in June.

Serrieres has been nearly unstoppable over the last two years, winning 13-of-15 XTERRA majors including the last two XTERRA European Championships. He was impressive in his victory against a stacked line-up at Nouvelle-Aquitaine on Saturday, and he’s won the last three in Prachatice.

When pressed for the secret to his success, Serrieres replied, “I think it’s the culmination of all my training for the last 10 years racing XTERRA. I never focused on being the best for one season, I just worked to increase my level year after year, and right now my level is high.”

The 28-year-old has always been a stellar runner, and now his swim is really strong too so he can get out of the water near the top contenders.

“I swam with the national team for two years, and it was hard but it helped me get better, and now I continue the work with Aurelien Lebrun to be more consistent,” said Serrieres, who said his strategy for Saturday is to ride safe and control the race from the front.

“I don’t know how it’ll play out, because everybody has a card to play. Félix Forissier can run fast, Ruben Ruzafa can ride fast, Maxim Chane can swim fast. Those are just examples, but the field is good and deep, and I want to come out on the top so I can forget the mechanical problem I had at XTERRA France.”

In Xonrupt, brothers Felix and Arthur Forissier finished 1-2 ahead of Serrieres, handing him his only blemish outside of placing runner-up to Hayden Wilde at the 2021 XTERRA World Championships.

“I’m looking forward to catching a big win again in XTERRA, although it seems I might have a better chance on Short Track than in a full distance race because Serrieres and Félix are so strong, but I’ll do my best,” said Arthur Forissier (pictured above left), who has seven career full distance XTERRA wins and three XTERRA Short Track victories including the very first one held in the Czech Republic in 2019.

It seems the whole field has high praise for Serrieres, including the man they call the “Boss” – Ruben Ruzafa from Spain.

“Serrieres is in a great moment, and to beat him would be very difficult, but of course, not impossible,” said Ruben Ruzafa, a 7x off-road triathlon world champion who had a 15-race win streak in 2015.

“Each race is different, a lot of things can happen, so managing them is the key,” added Ruzafa. “My opportunity to beat him is having a good swim and a good bike. I have done a good block of training, so if I recover well I will go fast in both races and fight with the top contenders for the victories.”

Sam Osborne (NZL), who won six XTERRA majors in 2019 and all three he competed at in 2021, has not caught fire yet in Europe but that seems inevitable.

“Goals are always the same, race to win,” said Osborne, who has been training in Girona, Spain. “The French men have shown they are going well at the moment but are all very beatable. There are lots of players who are able to change the dynamic, and Ruben looks like he is back to his cycling best and he’ll make sure the bike is lethal.”

There’s a new bike course in Prachatice this year that promises plenty of sweet single track trails that will benefit the stronger mountain bikers, Osborne included. Others that will enjoy the new technical sections in their hunt for a podium spot include Jens Emil Sloth Nielsen (DEN), Lukas Kocar (CZE), and Xavier Dafflon (SUI).

The women’s elite races promise to be every bit as exciting as the men’s, if not more so, as six of the top seven ranked women in the world are on the start lists. The only one missing is No. 1, reigning and six-time XTERRA World Champion Flora Duffy, who is scheduled to defend that world title October 1 in Trentino, Italy.

Sandra Mairhofer (pictured above) enters Prachatice with the biggest credentials by virtue of winning the World Triathlon Cross Championship in June and the XTERRA European Championship in Germany last year. Saturday’s race, however, will be just her second XTERRA of the season, and she uncharacteristically placed 7th at XTERRA Greece back in April in her first outing.

Her fellow countrywoman, Marta Menditto from Italy (pictured), posted the biggest win of her career at XTERRA France last month and hopes to carry that momentum into the next four events.

“I’m still dreaming about my win in France, and that motivated me a lot. I had a good block of training for these races and am happy with what I’ve done, but every race is different, and with four races everything can change in a really fast way,” she said. “I think Sandra is the best triathlete/biker that we have now in our races, she is amazing, but also Alizee Paties, Solenne Billoun, Loanne Doivouisin, there are a lot of women who can win.”

Duvoisin, the 2021 World Triathlon Cross Champion, was runner-up to Menditto in the full-distance race at France last month, but won the first XTERRA Short Track race of the season the day before.

“I was really tired after France but for the last month I have been getting into the rhythm with training, and should be in good shape this weekend,” said Duvoisin. who won the XTERRA Czech Championship last year. “The game plan is to go full gas! Honestly, I hope to have a good swim and then manage to maintain good power on the bike. I’m confident about my running, I’ve done some solid training in the last few weeks. In France, I had spent a lot of energy on the bike and it was really hard to get going again on the run afterwards, so my goal for this weekend would be, no matter what the race scenario is, to do a solid run.”

Samantha Kingsford, currently ranked 5th in the world, said training has been going smoothly and she looks forward to returning to the Czech Republic, where she raced in her first season of XTERRA in 2018.

“It’s a new course compared to what I last raced on, so not sure what to expect, but rumors have it there are proper mountain bike trails on this course which I’m really looking forward to,” said Kingsford, who swept through the U.S. Series in 2021 with wins in Alabama, Colorado, and Utah. “As for the game plan, it’s pretty simple … race hard and get on the podium or the top step. Being a championship race, everyone has marked this as a key race to peak so I’m expecting all the girls to turn up with their “A games” ready to battle it out!”

XTERRA will post updates from Saturday’s race on Instagram, and live coverage of XTERRA Short Track on Sunday, August 14, starts with the women’s race at 8:50am CEST, followed by the men’s race at 10:50 CEST.

Sunday’s race combines a two-lap, 400-meter swim with an exciting four-lap, 7.6K mountain bike course requiring skill and strength to master sections such as the Vittoria Rocks, The ElleErre downhill, and the Red Bull jumps, and finishes with a tough two-loop, 2.4K trail run. The winning effort should take the winners about 30 to 40 minutes to complete.