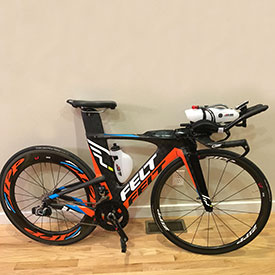 “I’m excited to explore new, innovative hydration and storage solutions for my Felt IA,” expressed Carfrae. “The size of the frame has always been a challenge when loading up for Kona. I used the Torpedo Versa aerobar hydration system recently at 70.3 Monterrey and was really happy with the outcome. The team at XLAB has been super responsive with the smallest details and that speaks volumes when preparing for a huge season and Kona.”

“I’ve watched Mirinda over the years and have always paid close attention to what she was running on her bike. We are very excited to have her as part of our family of pros,” said Candice Turner, COO of XLAB. “We have seen what has worked – and what hasn’t worked for Rinny – and we are excited to set her up with world-class equipment to keep hold of her hydration and nutrition needs in even the most demanding conditions.”

Outside of her return to the Big Island, highlights of Carfrae’s season include her perennial favorite, St. Anthony’s Triathlon this month, and a return to the North American Pro Championship at Ironman 70.3 St. George. Carfrae’s mid-season focus will center on Ironman Austria, and she is excited to head back to Europe to race amidst the incredible energy of European triathlon fans. Her selection of key Ironman 70.3 events will contribute to her preparation for Austria and Kona, with August and September focused solely on her bid for the World Title.

A more than two decade obsession with speed has launched XLAB into the lead as the premier manufacturer of aerodynamic hydration, nutrition and repair storage solutions. Our engineers passionately design, analyze and test systems for extremely light yet, extraordinarily reliable products that, propel athletic pursuit and capture 29 World Championship titles. Unmatched in design, technology and style, we fuel our athletes with the innovations that stay ahead of the pack. Explore the leading innovations in aerodynamic accessories at http://xlab-usa.com