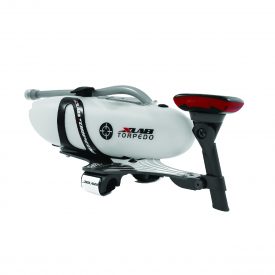 XLAB is proud to announce the new Torpedo Versa aerobar hydration system has been nominated for Interbike’s coveted ‘Triathlon Innovation of the Year’ award! This is a coveted award celebrating the year’s best products in the sport, voted on by a board of some of the sport’s most influential leaders.

Upon its launch in early 2016, the new Torpedo Versa raised the bar on the acclaimed, industry-first Torpedo System.  XLAB debuted new, never-before-seen features to front-end hydration; a list led by a telescoping computer mount that raises into the high position for the Torpedo Refill Bottle, or lowers all the way down for a standard bottle. The Torpedo Versa’s immense adjustability and SecureClip stability system made it an immediate favorite of triathletes.

In 2009, XLAB was the first company to introduce horizontal between-the-aerobar hydration mounts. XLAB pushed the envelope even further in 2013, debuting the Torpedo System – the first one-piece horizontal BTA bottle, as well as the first front computer mount for hydration systems.

The award covers all categories of triathlon, including bikes, wheels, components, accessories, clothing and more. Nominees were considered based on overall design, performance, technical spec, price point and styling. XLAB extends its gratitude to the Triathlon Business International voters for the incredible honor.

Visit xlab-usa.com/aerobar-systems to see an in-depth look at the Torpedo Versa’s innovative features. Stay tuned to Interbike news for the award ceremony on the evening of Thursday, September 22.