World’s Most Exclusive Half Marathon goes on Sale Today 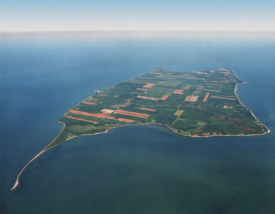 RunningFlat and Pelee Island Winery team up again to offer the most exclusive running experience in the world—an island run through one of Canada’s oldest grape growing regions making this Half Marathon Canada’s most Southern.

Pelee Island, Ontario August 2, 2016 —RunningFlat has just announced the 5th edition of this amazing race. On June 3th, 2017, runners will have the opportunity to run Canada’s southernmost half marathon, the Pelee Island Winery Half Marathon.

The 13.1-mile (21 km) course will run around the island, starting near the Vin Villa Miniature and finishing in the Pelee Island Winery. A scenic route around one of Canada’s oldest grape growing regions with picturesque views of Lake Erie, pristine Carolinian nature reserves, and acres of vineyards.

“Pelee Island is a gem in Lake Erie that attracts runners from all over the world. It is a truly remote destination run filling the island with runners and tourists”, says Chris Uszynski, race director.  The event is only limited to approximately 350 runners only and sells out in a couple days.  Registration opens for public sale today.  Registration is in Canadian funds so American Runners save over 30% on exchange.

Runners and their families can schedule a weekend away on the island and arrive via ferry, private plane, or private boat. Accommodations available include renting a cottage, staying at a Bed and Breakfast, or camping.

“This Half Marathon has been called the best half ever by past participants because the finish line is in the middle of the Pelee Island Winery where you enter the best after run party luncheon in running, with a wine tasting and huge catered luncheon and live band.” States Uszynski

Registration is open. Runners can get more information at www.runningflat.com

Pelee Island Winery is located on the mainland in Kingsville and was founded in 1979.  With more than 700 acres planted on Pelee Island, it is the most southerly vineyard in Canada. The Pelee Island Winery Pavilion located on Pelee Island is the hub of the island activity in the fair weather season. The Pavilion hosts everything from self-grilled picnics at the BBQ hut with live music to group functions in a relaxed, laid-back atmosphere.  It takes 1-2 full days to explore the 10,000-acre natural treasure that is Pele Island. More information about the winery can be found at www.peleeisland.com

RunningFlat is a race series organized and directed by Chris Uszynski since 2006. RunningFlat produce over 8 races a year including Le Chocolat Half Marathon, Hockeytown 5K Run, Canada D’Eh Run and Zombie Chase.   www.runningflat.com

RunningFlat produces a weekly radio show on AM800CKLW out of Windsor/Detroit.  Every week interesting guests and celebrities from around the running world.  This week’s guest is Corey Bellemore who broke the Beer Mile record twice in 4 days.  Also available on podcast from iTUNES at

View all Releases by Runningflat