World premiere in cycling – The Digital Swiss 5 moves up a level! 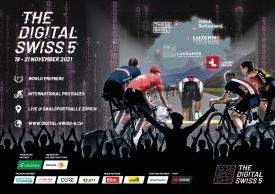 Zurich, Switzerland / Following its successful debut in April 2020, the next edition of The Digital Swiss 5 in November 2021 will be a cycling world premiere! The 2nd edition of the digital race series, The Digital Swiss 5, will now take place as a hybrid digital cycling event held in the Zurich Saalsporthalle for 3 days and simultaneously worldwide.

Who can forget the thrilling duel between Australian Michael Matthews and Swiss Stefan Küng in the fourth race in Emmental from Oberlangenegg to Langnau? With the limited availability of live sport  due to global COVID-19 lockdowns, The Digital Swiss 5 brought the world of sport back to life. Co-CEO of Cycling Unlimited, Joko Vogel, remembers: “The teams, the riders, the sponsors and of course the fans, were craving live sport. With the newly created format of a digital race series, we were able to provide all parties with an ideal platform giving 700 million (!) fans worldwide the opportunity to see cycling at the highest level, either online or on TV”.

The Digital Swiss 5 2.0 is a world first! From 19th to 21st November 2021, the competitors will line up against each other in front of an enthusiastic crowd, animated by a DJ with live commentary in Zurich’s Saalsporthalle. The professional cyclists will participate in the event as a team per nation. Each team will be made up of a maximum of 6 members, with at least one female professional road cyclist, one male professional road cyclist as well as one male and one female guest cyclist. The guest cyclists are professionals from the world of cycling such as triathlon, mountain biking, cyclo-cross or track cycling. Three of the maximum six team members will ride the events in the Saalsporthalle in Zurich. The other team members will participate digitally from home. The first participants will be announced shortly via digital-swiss-5.ch.

Thanks to Digital Cycling it is possible to experience races in the heart of Lucerne, Lugano, Lausanne, Basel and Zurich within three days. Commenting on the cooperation with Switzerland Tourism that created the five host cities, Joko Vogel said: “It’s a great way to get the beauty of Switzerland out into the world”. The five flat or slightly undulating routes lead through the cities over several laps and take about an hour to complete. The event will be broadcast nationally by SRF and internationally by various TV stations and will be supported by major media partners. “A big thank you to the Zurich Sports Authority for its support.”

The Digital Cycling platform ROUVY has made significant progress in recent months to ensure that the virtual cycling experience is even more realistic. It is now possible to draft the digital rider in front of one, giving an even more realistic cycling experience. In addition, the avatars, i.e., the digital professionals, have been further refined and now move in a way that real cyclists do.“The race series has been further developed in all areas and offers new potential for the cyclists and thus more entertainment for spectators,” says Joko Vogel.

The Digital Swiss 5 2.0 will also offer a limited number of amateur riders the unique opportunity to ride the five stages in the run-up to the professional races in Zurich’s Saalsporthalle. Just like the Pros, the 100 or so amateur cyclists will ride all five races on the ROUVY interactive platform on their own Smart-Trainers. And just like the Pros, they will be cheered on by spectators and experience an unforgettable racing atmosphere. Parallel to the amateur race in the Saalsporthalle, the same race will also take place digitally (registrations now open), with a large number of participants expected worldwide.

// The German version of the press release and visual posters are here.

Cycling Unlimited AG was founded on 1 July 2019 with the aim of developing cycling and building a modern and sustainable community platform. Four major players in the national cycling scene, including the Swiss Cycling Association, formed a new authority in the Swiss cycling world. The idea behind the new platform – a cross-target group network for national cycling – is being pursued by the whole team with great passion and motivation. Cycling Unlimited organises and markets the biggest Swiss professional and amateur cycling events in the country. These include the Tour de Suisse, the Tour de Suisse Challenge, TORTOUR Ultracycling and TORTOUR Gravel as well as the Swiss Cycling Alpenbrevet. In addition, there is the advancement of digital cycling, which according to Co-CEO Joko Vogel: “Offers great potential for the future and will certainly play a decisive role in the cycling era of the 21st century”.

The Czech company ROUVY, is one of the most popular providers of indoor training software solutions in the cycling community. ROUVY distinguishes itself from other providers due to its 1:1 realistic representations of route simulations. These are based on actual video recordings of each route with augmented overlays of riders and race gates. In addition to a number of existing routes, such as the Furka Pass, the Stelvio or other cycling classics, ROUVY also offers a wide range of virtual events for the enjoyment of its user community.