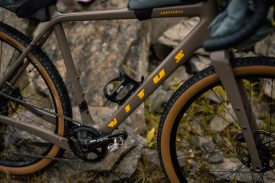 Long-established European bike brand brings its diverse line of bikes to US customers.

“When I look at the Vitus line of bikes, I get giddy. Being able to offer this initial lineup directly to US riders is a tremendous opportunity,” said Brad Howell, US Brand Manager for Vitus Bikes. “From privateer racers to weekend enthusiasts, Vitus offers something for everyone in the worlds of road, mountain, and gravel riding; we even have a killer kids’ line. If riding bikes fills your cup and spreads a smile across your face, then Vitus is for you!”

Vitus bikes have long been available in Europe and loved by riders of all abilities and disciplines. During the 1970s, Vitus manufactured high-end steel race frames and into the 1990s, played a pivotal role in pioneering aluminum and carbon fiber frames. While proud of this heritage, the current-day team of Vitus engineers, designers, product managers, marketers, and athletes are driven by one goal: to make the best bikes for all kinds of riders.

Because of Vitus’ consumer-direct model, the brand offers riders performance-oriented bikes at accessible price points. Instead of relying on third-party resellers, Vitus’ Salt Lake City-based team of quality care representatives and expert mechanics oversee every aspect of a bike’s assembly and quality control before shipping to consumers. Bikes are pulled from a US-specific inventory in Salt Lake City and arrive to riders in fully recyclable cardboard boxes with zero-waste packaging. Vitus also offers a 30-day ride guarantee and a US-based team of customer care representatives are at the ready for any questions riders may have before, during, and after their purchase.

While additional models and model specs will make their way online throughout 2023, Vitus will start by offering a handful of its most popular models in the following disciplines.

At Vitus, we make extraordinary bikes for real riders, and we’ve been doing it for over 90 years. Vitus Bikes’ roots trace back to St. Etienne, France, where during the 1930s, Vitus made high-end steel tubing. In the 1970s and 1980s, Vitus innovated ground-breaking race frames with aluminum and lugged carbon and became one of the most desirable international racing frame brands. After a huge winning run with world champ Sean Kelly, Vitus was reborn in 2011 under new ownership in Belfast, Northern Ireland. Since then, Vitus has remained rooted in its heritage of cutting-edge frame design, working with the latest technologies and materials to create bikes that are ready to perform in any setting. By selling directly to riders and eschewing expensive elite sponsorship in favor of supporting local races, clubs, and events, we give the best and most accessible ride experience to as many riders as possible.