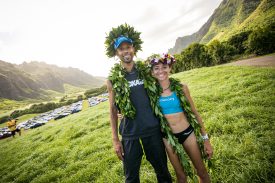 Highlighting the all-star cast from the U.S. Mountain Running Team are 2019 XTERRA Trail Run World Champions Joe Gray and Grayson Murphy, who also both won the USATF Mountain Running Championship crowns this past August in Oregon.

November 1, 2021 /ENDURANCE SPORTSWIRE/ – The top trail runners in the U.S. are headed to Hawaii to compete in the XTERRA Trail Run World Championship half-marathon at The Ritz-Carlton, Kapalua on December 4, 2021.

Highlighting the all-star cast from the U.S. Mountain Running Team are 2019 XTERRA Trail Run World Champions Joe Gray and Grayson Murphy, who also both won the USATF Mountain Running Championship crowns this past August in Oregon.

In 2019, Gray won his unprecedented fifth XTERRA World Championship, surpassing Max King who won four-straight from 2008-2011. For Murphy, it was her first XTERRA title, and she finished a remarkable fifth overall.  Even more impressive, those two had just won the 2019 World Mountain Running Championship crowns in Argentina the weekend prior.

Other USMRT members racing in Maui include Eddie Owens, Joseph DeMoor, and Andy Wacker for the men; and Rachel Johnson, Bailey Kowalczyk, and Megan Lacy for the women.

“Our team is composed of athletes who finished at the top of the leaderboard at the USATF Mountain Running Championships,” explained Nancy Hobbs, USATF Mountain Ultra Trail Running chairperson.

“Originally they would have competed at the World Mountain and Trail Running Championships scheduled for November in Thailand, but this event was postponed to 2022. We next tried to get them to the WMRA Mountain Running Nations Cup event this weekend in Italy, however, USATF is not allowing teams to travel internationally to countries designated by the CDC at level 3 or level 4.”

XTERRA Trail Run Worlds, which was held on the island of Oahu for 12 years from to 2008-2019, will be taking place in Maui for the first time on a thrilling new course that navigates forest trails, pineapple fields, and ridgelines high above the northwest coast.

“Since we had budget and wanted to give these athletes an opportunity to compete in a high-quality domestic event in 2021, XTERRA was the obvious choice,” said Richard Bolt, the U.S. Mountain Running Team Leader.  “We’ve always had a lot of US Mountain Running Team members race XTERRA and they’ve had great experiences. Plus, it’s Hawaii, so who wouldn’t want to go, right!?”

A capacity max field of 1,000 runners is expected for the event, and $10,000 in prize money will be awarded to the top five men and women.

Held in conjunction with the 25th XTERRA World Championship off-road triathlon, the trail run world championship and associated Kapalua trail runs are an opportunity for outdoor enthusiasts of all ages and skill levels to get involved and experience the legendary XTERRA run course.

“We are thrilled to have the US Mountain Running Team join us in Maui,” said XTERRA Trail Run Series manager, Emily McIlvaine.  “This is the first year our tri and trail run world championships will be held on the same weekend, and we can’t wait to have the best athletes in XTERRA racing together in one place. It is sure to be an epic weekend filled with excitement, and having the stars from the USMRT with us will make it even more historic.”

More information and links to registration can be found at https://www.xterraplanet.com/kapalua.

XTERRA® is a global lifestyle brand and off-road race series. What started in 1996 as the world’s first off-road triathlon in Maui, Hawaii, is now an endurance sports lifestyle with a racing presence in over 30 countries worldwide and expanding. XTERRA® cultivates a passionate and dedicated community, celebrated by intrepid triathletes, trail runners and outdoor adventurists around the globe. Learn more at www.xterraplanet.com.