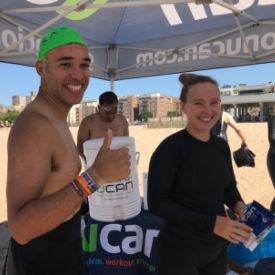 UCAN announced partnerships with the prestigious Tri Club San Diego and Empire Tri Club of NYC. As the Official Nutrition Sponsor of these clubs, UCAN will provide educational seminars with its deep roster of experts, live interviews with pro athletes, and opportunities for members to try UCAN’s various innovative products through workout demos, race support, giveaways and special promotions.

“We understand that providing support to triathletes through these amazing communities they’ve created is key to them performing their best,” said Shoba Murali, CEO of The UCAN Company. “How you perform on race day is a reflection of how well you train, recover and take care of your body, and we want to be there to help athletes get the most out of their training. UCAN is uniquely suited to this task because our products build healthy, lean athletes through stable blood sugar, increased fat-burning, and low or no sugar.”

UCAN was originally created for a purpose – to provide energy for a child with a rare condition that prohibits the body from producing its own blood sugar, resulting in frequent and dangerous episodes of hypoglycemia. Out of this need came SuperStarch®, a patented, slow-releasing carbohydrate that delivers steady, long-lasting energy with no spikes and no crash.

After conducting clinical trials on athletes, who also need to work to manage their glucose levels, UCAN launched nutrition products powered by SuperStarch® in 2012. Top athletes like 4x Olympian Meb Keflezighi and Dathan Ritzenhein fuel their training with UCAN, and UCAN is now capturing the attention of top athletes and coaches in the triathlon and cycling world, such as Hunter Allen and Dr. Paul Laursen.

“The Triathlon Club of San Diego is proud to partner with UCAN,” said Marc Sosnowski, Director of Sponsorship for TCSD. “Triathletes of every ability are continuously looking for ways to improve performance and nutrition plays a large part in training and in competition. UCAN’s revolutionary fueling source will provide our members with that competitive edge.”

Tri Club San Diego is one of the oldest and largest Tri Clubs in the world, residing at the sport’s birthplace. The first triathlon was held in Mission Bay in 1974, and San Diego remains a haven for triathletes to this day. TCSD has what few other clubs can even dream of: interviews with top pro triathletes like Daniela Ryf, Lionel Sanders, Tim O’Donnell and Mirinda Carfrae, all done by the Storyteller of the Triathlon World, Bob Babbitt.

“I have always been a firm believer in the power of triathlon clubs and love to support them how I can because they serve as the welcome mat for our amazing sport,” says Babbitt. “The fact that UCAN is investing in the Triathlon Club of San Diego on the west coast and the Empire Triathlon Club on the east coast speaks volumes for UCAN’s commitment to our sport.”

Empire Tri Club is a thriving community in NYC that hosts Open Water Swim clinics on behalf of the iconic NYC Triathlon, weekly workouts in Central Park, camps in Martha’s Vineyard and socials around NYC. Empire offers coaching, programs and resources for beginners all the way up to Kona-Qualifying Ironman athletes and has over 8,000 members in its network.

“I’ve been hearing great things about UCAN for some time now, and I’ve found that they are a brand that is truly behind its athletes and clubs,” shared Alison Kreideweis, Co-Founder and Head Coach of Empire Tri Club. “The UCAN staff is top notch – they are genuinely interested in educating athletes and supporting clubs, not just handing out product. I know great things are going to come from this relationship.”

UCAN delivers smarter energy powered by SuperStarch®, a patented, slow-releasing complex carbohydrate that delivers steady, long-lasting energy with no spikes and no crash. Originally created for a child with a rare metabolic disorder, UCAN Energy Powders and Energy Bars with SuperStarch® are the go-to nutrition for over 80 colleges, 40 pro teams, Olympic marathoners, elite triathletes, cyclists, thought leaders in health and performance, and everyday athletes looking for steady energy without all the sugar. UCAN is a company built on purpose and passion. Learn more at generationucan.com and get the latest buzz in the UCAN world @GenUCAN on Twitter, Facebook, and Instagram. UCAN nutrition products are currently available in powder and bar format, in a variety of flavors, at 350+ specialty run, bike and tri stores around the country and also can be purchased online. #UCAN