The Sufferfest Announces Route for the 2019 Tour of Sufferlandria 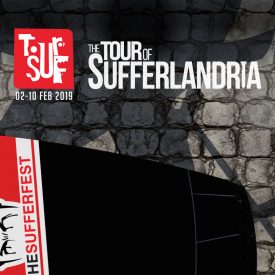 The Sufferfest, a comprehensive training app for cyclists and triathletes, today announced the route of the 2019 Tour of Sufferlandria, their annual fundraiser to benefit the Davis Phinney Foundation. Billed as “The Greatest Grand Tour of a Mythical Country in the World”, the Tour of Sufferlandria will take place February 2-10, 2019. It challenges riders to complete nine straight days of “stages” comprised of videos from The Sufferfest catalog of structured, high-intensity workouts.

This is the seventh edition of the Tour of Sufferlandria, which attracts thousands of riders from around the world who take on the personal challenge at home or at one of more than 160 Sufferlandrian Embassies worldwide. Over the past four years the Tour has raised over $500,000 for the Davis Phinney Foundation and their programs to help those affected by Parkinson’s Disease.

To participate in the Tour, riders register and donate at least $10 to the Davis Phinney Foundation. For every $10 a rider donates or raises through their individual fundraising page, they earn one chance at the prize pool. This year, The Sufferfest has partnered with Tour sponsors AltRed, Col Collective Cycling Tours, Wahoo Fitness and Wattbike to provide four premiere prizes: a year supply of AltRed natural performance supplement, a Col Collective Cycling Tours 7-day European cycling tour, a Wahoo Fitness Ultimate Wahooligan Bundle, and a Wattbike Atom indoor smart trainer. Other sponsors—including Quarq, Garmin, Stac Zero, Concept2, Giro, Oakley, and others have donated prizes worth more than $25,000.

“We’re amazed at how the Tour of Sufferlandria brings the community together every year to help those affected by this disease” said American Cycling Legend and Davis Phinney Foundation founder Davis Phinney. “We have a saying in the Parkinson’s community that every victory counts. Completing the Tour isn’t just an accomplishment in itself, but one that helps those living with Parkinson’s achieve their own victories and live well today.”

To watch the official route announcement and register for the 2019 Tour of Sufferlandria, visit https://thesufferfest.com/pages/community-tour-of-sufferlandria.

The Sufferfest is the most comprehensive training app for time-crunched cyclists and triathletes. You get unlimited streaming or offline access to a massive library of structured cycling, running, and triathlon workouts, 36 Yoga for Cyclists videos, a 10-week Mental Toughness Programme, and Strength Training for Cyclists. Every workout is designed by elite coaches and sports scientists to provide maximum benefit with minimum time, combining killer soundtracks, engaging storylines, and exclusive footage of the world’s biggest professional races. Exclusive to The Sufferfest, Four-Dimensional Power (4DP™) measures how you produce power across a range of efforts to provide the most effective workouts available. The app also includes over 100 training plans for road, mountain, triathlon, and cyclocross. Connection to smart trainers and other fitness devices allows you to train to specific targets, analyze performance data, and share instantly with platforms like Strava, TrainingPeaks, and Garmin Connect. Available for iOS, macOS and Windows. For more information visit https://thesufferfest.com

About the Davis Phinney Foundation

The Davis Phinney Foundation was created in 2004 by Olympic medalist and retired professional cyclist, Davis Phinney, to help people with Parkinson’s disease live well today. Phinney was diagnosed in 2000 at age 40 with Parkinson’s. The Foundation’s major initiatives include: the Every Victory Counts® manual, developed by movement disorder experts to provide practical ways to live well with Parkinson’s; The Victory Summit® symposia series, which brings experts into communities to share advances in science, care and to inspire those affected by the disease to take action; the Living Well ChallengeTM educational webinar series; the “Parkinson’s Exercise Essentials” DVD and, the funding of research focused on exercise, speech and other quality of life therapies. Visit the website: www.davisphinneyfoundation.org.

View all Releases by The Sufferfest