The IRONMAN Foundation and Mike Reilly, The “Voice of IRONMAN”, are Auctioning a Piece of IRONMAN History to Support Race Communities Around the Globe 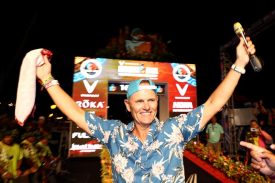 TAMPA, Florida (November 15, 2022) /ENDURANCE SPORTSWIRE/ – The IRONMAN Foundation and Mike Reilly, the “Voice of IRONMAN”, have opened online bidding for one-of-a-kind IRONMAN® collectibles to benefit race communities around the globe. The auction will showcase a rally towel used by Mike Reilly during his final season as the “Voice of IRONMAN” before his retirement, as well as official finish line tapes from the 2022 VinFast IRONMAN World Championship and Intermountain Healthcare IRONMAN 70.3 World Championship presented by Utah Sports Commission autographed by the top professional men and women finishers. Bidding on these items is open now through 11:59 p.m. ET on December 16, 202 by visiting www.ironmanfoundation.org.

“I’ve been fortunate to be a part of The IRONMAN Foundation as its Ambassador Captain for the last six years,” shared Mike Reilly. “One of the only regrets I have in my career is not getting involved with The IRONMAN Foundation sooner. I’m excited to get to give back to all the amazing IRONMAN and IRONMAN 70.3® race communities around the world that have welcomed me with open arms, by gifting this special rally towel to The IRONMAN Foundation to raise money for the important work they do.”

Mike Reilly will retire in December after his final race, the 2022 Nutri-Grain IRONMAN New Zealand triathlon. Reilly has called more than 210 IRONMAN races worldwide over the last 33 years, and his iconic call of “You are an IRONMAN!” has been heard by nearly a half a million finishers. In the mid-90s, Reilly started waving a rally towel at the IRONMAN World Championship in Kailua-Kona, Hawai`i to energize the crowd as much as possible. “The louder I make it for each finisher in the final hours of their race day, the better,” said Reilly.

The rally towel up for auction has been used by Mike Reilly at nearly all of the IRONMAN races he has called for the past ten years; it has “Anything is Possible” inscribed on the front, embroidered with Mike Reilly’s signature and will be placed in a shadow box display provided by Fond Memories Graphics.

The auction also features the official finish line tapes that the champions from this year’s VinFast IRONMAN World Championship race and Intermountain Healthcare IRONMAN 70.3 World Championship presented by Utah Sports Commission race ran through as they took the crowns. In total, four finish line tapes are up for auction, one autographed by the top three professional men and the other by the top three professional women finishers for both events. The IRONMAN Group’s world championship events provide the main stage for top IRONMAN and IRONMAN 70.3 triathletes from around the world to compete side by side.

Bidding is open now through 11:59 p.m. ET on December 16, 2022. To donate, and for more information on the online auction or The IRONMAN Foundation, visit www.ironmanfoundation.org.

About The IRONMAN Foundation

The IRONMAN Foundation creates positive, tangible change in race communities by engaging athletes and volunteers to participate in programs that demonstrate service through sport and commitment to the community. Since 2003, over $55,000,000 has been provided through giveback programs led by The IRONMAN Foundation to more than 10,000 local, regional, national, and global nonprofit initiatives. Through these partnerships, IRONMAN, and Rock’ n’ Roll Running Series participants are powerfully linked to the community and together help leave a positive legacy behind in race communities long after event day. For more information on The IRONMAN Foundation programs, including Team IMF, Community Fund, Rock This Town®, Your Journey Your Cause®, and Race For Change™, visit www.ironmanfoundation.org.

View all Releases by IRONMAN Foundation