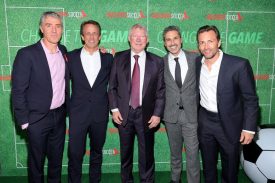 NEW YORK, December 7, 2021  /ENDURANCE SPORTSWIRE/ – To mark today’s World AIDS Day, celebrities, footballers, and leaders in business and media came together on Tuesday to support a fundraising gala evening for international football/soccer charity Grassroot Soccer (@GrassrootSoccer) at Ziegfeld Ballroom in Manhattan. The international charity has used soccer/football as a platform to educate over 13 million young people in 60 countries around the world about health issues, including the dangers and preventative measures of one of the greatest health challenges in Africa: HIV/AIDS. The evening raised an estimated more than $1.4 million for the organization.

“To be able to bring everyone here to New York City for Giving Tuesday and World Aids day is just an incredible feeling,” said Zohn. “We’ve all been locked down and in isolation for a really long time so it just feels really good to bring everyone together to celebrate the beautiful sport of soccer and the incredible things we are doing around the world.”

“Soccer is without question the biggest sport in the world,” said Ferguson. “Grassroot Soccer is using the sport as a template to impact the most people. What Tommy Clark has undertaken is a fantastic challenge, and for me, it’s easy to get involved in something which is so honest and benefits so many in poverty.”

“It’s really nice I have friends who are involved with the event who reached out and when they explained what Grassroot was it was a no brainer,” added Meyers. “Then, to have soccer royalty on the scene, it’s a great way to spend an evening.”

The event provided guests the opportunity to learn about Grassroot Soccer’s vital programs in Africa to educate and inspire young people to live healthier lives and give them hope for the future.

There was fierce bidding in the silent auction. Among the hottest prizes of the night were VIP tickets to the Late Show with Seth Meyers, a Chelsea FC matchday experience including a post-game meet and greet with Christian Pulisic, a dinner party with former Obama White House chef Sam Kass, and a signed print from artist Andre Saraiva.

Grassroot Soccer has provided health education, access to testing, and support for treatment to over 150,000 young people in the past year, with programs in countries with the highest levels of HIV in the world, including its flagship projects in South Africa, Zambia and Zimbabwe, plus other nations with a high HIV rate such as Nigeria, Malawi, and many more.

“It’s amazing to see this,” added Clark. “A couple of reasons why I think it’s been successful is I think it’s a simple idea, it’s a good idea, but I think it’s the hard work of a lot of people if you really really think about it.”

Grassroot Soccer (GRS) is an international adolescent health organization that educates, inspires and mobilizes young people to overcome their greatest health challenges and live healthier, more productive lives. GRS uses the power of football to connect young people with the mentors, information, and health services they need to thrive, and empowers adolescents to make educated choices about pressing health challenges such as HIV & AIDS, sexual health, gender-based violence, and malaria. GRS’s evidence-based programs, led by trained local Caring Coaches, incorporate football into dynamic lessons about health and wellness that engage young people and break down cultural barriers. With proven results and a constant focus on research and innovation, GRS has reached over 13 million young people in more than 60 countries with health education.