The $10,000 raised during the bonus cash lap Friday during the Colorado Classic® presented by VF Corporation is believed to far exceed any cash lap in women’s pro cycling history and possibly exceeds any single payout for a sprint lap in pro cycling in general.

Each stage of this year’s Classic includes a bonus cash lap, also known in cycling as a “prime.” The race seeds $1,000 as a minimum bonus and additional donations are crowd-sourced by fans via an innovative text-to-donate system (for Stage 3, text “GoldenCo” to 797979 and for Stage 4, “Denver” to 797979), with half going to the fastest sprinter in the lap and half going to a local charity. During Stage 2 – Avon presented by FirstBank on Friday, an unprecedented $10,000 was raised, split between lap winner Jennifer Valente (Sho-Air TWENTY20) and the Chris Anthony Youth Initiative Project, a charity founded by professional skier and former competitive cyclist Chris Anthony with a mission to provide educational enrichment opportunities for children.

“I wanted to raise the largest cash lap ever in women’s pro cycling,” Anthony said after Friday’s race, adding that a total of 68 individuals/entities donated to the lap. “The prime lap gives the race that double hit of excitement. You get the audience engaged and create an extra charge of energy among the racers. It’s like a race within a race.”

“In my 35 years in the sport, I’ve never heard of a mid-race prime of that level,” said Colorado Classic Race Director Sean Petty. “A lot of prize lists for big races don’t come close to that. The Tour of Flanders, a World Tour race and one of the monuments of cycling, pays about 1,300 Euros. The winner of the Giro Rosa, the 10-day stage race and probably the most difficult women’s stage race, gets 5,000 Euros for the whole race.”

Valente has competed for primes in other races, but had never earned anything close to $5,000 for a single lap. She said the fire fueled by Friday’s bonus lap was palpable within the peloton.

“I think it’s a really cool way to get the crowd involved and feel they’re adding to the excitement of the race. Today it definitely was,” Valente said after the race. “It was a way for everyone to be involved in that excitement. It gets the people watching excited and it makes the sprints quicker. More people were going for that sprint because of the prime and not just for the sprint points. It goes to show how involved the sponsors and fans are in supporting this event and really rallying behind the women.”

As racing continues today with Stage 3 in Golden, the fourth of the seven high-speed laps will serve as the bonus cash lap, with half of the generated sum going to local charity Golden Giddyup, a local mountain bike race and festival and subsidiary of the Jeffco Outdoors Foundation, which uses funding for stewardship work in Jefferson County Open Space parks and trails. Go here to donate to the Stage 3 Golden bonus cash lap and go here to donate to Stage 4 in Denver.

The 2019 Colorado Classic® presented by VF Corporation is the only 2.1 UCI-ranked women’s standalone pro road race in the Western Hemisphere. Nearly 100 of the world’s best racers from 16 teams are competing in the four-stage race over challenging, iconic Colorado mountain and urban terrain Aug 22-25.

Those who can’t watch the race in person can watch live streaming coverage from start to finish and follow statistics and race progress by downloading Tour Tracker. 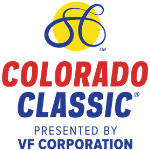 How one rider got Strava to remove racially offensive segment names