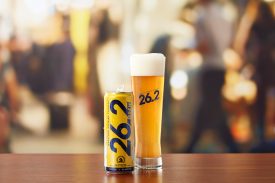 New 26.2 Brew will be available for runners and athletes to enjoy after the race

COSTA MESA, Calif. (Apr. 10, 2019) – The OC Running Festival, a world-class, three-day event will introduce its more than 23,000 participants from 46 states and 22 countries to the new 26.2 Brew as Marathon Brewing Company becomes the Official Beer Sponsor for the 2019 and 2020 events. Now celebrating its 15th year, the OC Running Festival will be held May 3 to 5, 2019, and features the OC Half-Marathon, OC 5k, OC Music Festival, the Kids Run the OC “Final Mile”, and the OC Lifestyle and Fitness Expo.

Just introduced by Marathon Brewing Company, an endeavor of The Boston Beer Company, 26.2 Brew is the beer made by runners for runners. Hailed as a golden, hazy ale with a crisp body and clean finish, the new beer a refreshing reward for all levels of runners, from enthusiasts to marathoners. 26.2 Brew has 4.0% ABV, 9g carbs, and just 120 calories.

“As someone who loves beer and running, having the opportunity to brew a beer that helps runners celebrate their hard work was a passion project for me,” says Smith, Advanced Cicerone and Manager of Research & Product Innovation at The Boston Beer Company. “Understanding what is important to OC Marathoners and Half Marathoners is what made brewing this beer different from what is currently available. While most brewers are stripping flavor to hit a certain calorie mark, we focused on brewing a beer that not only fit what runners were looking for, but also delivered a great taste.”

“Each year, we continue to elevate the experience at the OC Running Festival for all of our participants and their fans, and having 26.2 Brew on tap will give our runners a tasty and refreshing reward at the finish line,” said Gary Kutscher, race director, OC Running Festival. “Marathon Brewing Company deserves a medal of their own, creating a new brew that will resonate among runners here in Orange County and across the country.”

The SDCCU OC Marathon, one of the best destination courses on the West Coast with a diverse terrain, changing coastal and inland vistas, and majestic ocean views, will be held on Sunday, May 5. Both the marathon and half-marathon begin at Fashion Island in Newport Beach, and then wind through Newport Beach, Santa Ana and Costa Mesa to the finish line at the OC Fair and Event Center in the heart of Costa Mesa.

On Saturday, May 4, more than 3,000 people will compete in the OC 5k, followed by the OC Music Festival featuring great food, lively music and fun for the entire family. Also on May 4, approximately 9,500 local children, who completed a 10 to 12-week, in-school fitness program accumulating 25.2 miles of activity, will finish their “final mile.” The Kids Run the OC program was created in 2006 by the non-profit OC Marathon Foundation to promote health and fitness among school-age children. It is one of the largest youth running programs in the country with more than 65,000 Orange County students participating since inception. Marathon Brewing Company is not sponsoring the Kids Run.

The OC Running Festival is also the home to the OC Lifestyle and Fitness Expo, which runs Friday, May 3 to Saturday, May 4, and where an estimated 25,000 runners and spectators will visit and learn from more than 70 exhibitors.

Marathon Brewing, a new endeavor from The Boston Beer Company, allows brewers to experiment and develop beers with a new wave of drinkers in mind. As consumers seek better alternative options in their daily lives, they also look for purpose and balance in what they eat and drink. No matter what Marathon Brewing is creating, it always chooses the best ingredients possible to deliver the highest quality product for drinkers seeking more.

About the OC Marathon Running Festival

Now celebrating its 15th year, the 2019 OC Marathon Running Festival is a world-class event featuring the SDCCU OC Marathon and Half-Marathon, the OC 5k, the Kids Run the OC Final Mile, the Ultimate Finish Line Festival, and the OC Lifestyle and Fitness Expo, all held at the Orange County Fair and Events Center in Costa Mesa, California, from May 3 to 5, 2019. The marathon and half-marathon is one of the best destination courses on the West Coast with a diverse terrain, changing coastal and inland vistas, and majestic ocean views. During the weekend, more than 23,000 participants, including nearly 10,000 children, will enjoy food, music and other family-fun entertainment.

To register for the races, or for more information about how to get involved including corporate sponsorships, visit ocmarathon.com, @OCMarathon, or email [email protected].

View all Releases by Gary Kutscher

September could be a blockbuster month for racing