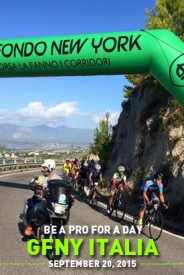 Racers from 27 countries got to race like pros for a day at the second annual GFNY Italia on September 20, 2015. Start and finish were held in the town of Terracina in the Lazio region, just an hour south of Rome at the Tyrrhenian coast. Athletes from 27 countries such as Ecuador, USA, Indonesia, Chile, Mexico, Canada, Australia, Brazil, Argentina, Singapore and across Europe tackled the 78-mile/125km long course with 6,230ft/1,900m of climbing or the 65-mile/100km medium course with 5,426ft/1,500m of climbing. Both routes start at the sea and travel into the Ausonian hills. Sunny skies and 25C / 77F temperatures provided ideal racing and riding conditions.

The coastal town of Terracina played host to GFNY Italia for the second year. Terracina’s Ancient Roman remains of the Temple of Jupiter Anxur, built in 1st century BCE, sit atop a cliff that overlooks the start & finish area of GFNY Italia and contributed to stunning start and finish line photos for memories to last a lifetime for all participants. Cyclists were treated to views of Tyrrhenian Sea, Ausoni mountains, palm trees, and welcoming small Italian towns and villages in this race, one of the most beautiful gran fondo courses in all of Italy.

Nikita Eskov from Russia won the race in 3:19:41 with an attack during the final kilometer. Luisiano Cannizzaro from Italy won the sprint for second place just five seconds back. The women’s race was won by Italian Manuela De Iuliis in 3:37:16. She took the race by distancing second place finisher Cristina Coletti (Italy) by 4 minutes.

Only a few racers were in the hunt for the overall win. However, age groupers were fighting hard to be in the top 10% of their category to snatch a racer corral spot for the 2nd annual GFNY Championship in NYC on May 15, 2016.

“At Campagnolo GFNY in NYC we have the most spectacular start line in cycling on the George Washington Bridge,” says Uli Fluhme, CEO of GFNY. “But the course at GFNY Italia is arguably one of the most spectacular in the world. I’ve raced 100 granfondos around the globe but the views from the Sperlonga climb over the sea are mesmerizing. I don’t know any better way to close out the European GFNY season.

The 3rd annual GFNY Italia is set for September 18, 2016. Race registration is open now at gfnyitalia.com.