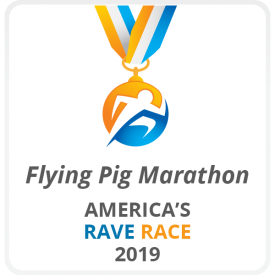 All hail to the Queen (City), as Cincinnati’s hometown favorite hogs the spotlight to capture its second tournament title

Tens of thousands of runners across the country cast their votes in the third annual March Lunacy tournament hosted by RaceRaves.com, propelling Ohio’s largest annual marathon event to its second championship in three years while leaving other races pink with envy.

To give avid runners a tournament of their own, RaceRaves created a “March Madness for races” featuring 64 top U.S. road and trail races of all distances. Events in four geographic regions were seeded based on the number of 2018 finishers and their RaceRaves reviews, with the exception of last year’s Final Four which each earned a #1 seed. Voting was conducted in six rounds over three weeks, with races that earned the most votes advancing to the next round.

This year’s Final Four was an epic showdown of familiar heavyweights and spirited Cinderellas, with both matchups decided in a one-day overtime thriller, a tournament first. The indomitable Flying Pig outlasted the patriotic powerhouse Marine Corps Marathon to set up a championship matchup against Appalachian favorite Hatfield McCoy Marathon, which edged out the breathtaking Glacier Half by the slimmest of margins.

But when the final buzzer sounded, Flying Pig soared above the rest, withstanding a furious late rally by Hatfield McCoy to win by the hair of its chinny chin chin. In securing its second March Lunacy title, Flying Pig capped a strong tournament performance consistent with its current RaceRaves rating of 4.8/5.0 across 230+ reviews.

Meanwhile, with its storybook rise from 15-seed to South Region champ and tournament finalist, Hatfield McCoy cemented its reputation as a small-town race with big-time heart, echoing its own RaceRaves rating of 4.9/5.0 across 30+ reviews.

“On behalf of the Flying Pig Marathon team, we’re thrilled by this accolade and grateful to RaceRaves and to all our runners and supporters who voted us America’s Rave Race,” said Iris Simpson Bush, Executive Director of the Flying Pig Marathon. “This award belongs to the entire Pig community, and we invite all runners to join us in Cincinnati and experience the Pig for themselves as we look forward to producing another world-class event this May.”

Now in its 21st year, Flying Pig embraces its pork-uliar past as the one-time largest pork-producing city in the world, with start corrals known as “pig pens”, volunteers affectionately referred to as “grunts,” and a “finish swine” where finishers collect pig-themed swag. The scenic urban course starts and finishes in Cincinnati with a brief crossing of the Ohio River into Northern Kentucky. Along the way, unrivaled community support and frequent fun stations help its runners conquer the Queen City.

The Cincinnati Flying Pig Marathon takes place May 3–5, 2019, while the Hatfield McCoy Marathon celebrates its 20th anniversary on June 8, 2019. Registration is filling fast for both events, which offer a variety of distances for runners of all ages and skill levels.

“We’re psyched to congratulate Flying Pig on its well-deserved win in our third annual March Lunacy tournament,” said RaceRaves Co-founder Mike Sohaskey, admitting the tournament’s six rounds exhausted his own team’s supply of pig puns. “And we’re excited once again to showcase the diversity of great running events across the country. The exuberant response to this year’s tournament reaffirms RaceRaves as the premier resource to help runners of all levels discover the best races, from well-known events to hidden gems.”

The final March Lunacy bracket and tournament results can be found on RaceRaves.com.

Founded in 2014, RaceRaves.com is the leading online race finder and reviews community for runners around the world to share their experiences and find their next challenge. The company’s robust race database, intuitive search tools, finisher reviews from all 50 states and 75+ countries, and compelling editorial content establish RaceRaves as a trusted resource for runners and endurance athletes. With its authentic voice and fast-growing audience, RaceRaves helps brands and events resonate with runners of all levels. #ravinglunatic

View all Releases by Katie