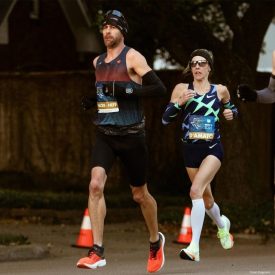 January 19th, 2022, Houston, Texas /ENDURANCE SPORTSWIRE/ – Keira D’Amato set a new women’s American record at the 2022 Houston Marathon this past Sunday when she crossed the finish line in 2:19:12, breaking the previous mark of 2:19:36 set by Deena Kastor at the London Marathon way back in 2006. Calum Neff, a member of the rabbitELITE team, was by her side almost the entire way.

Neff clocked a 2:19:33 finishing time, a personal best of his own, after pacing D’Amato through twenty-six miles of her twenty-six-point-two-mile record setting race. Averaging 5 minutes and nineteen seconds per mile, the pace felt familiar to Neff, who was pacing an American record marathon attempt for the second time in less than two years.

Sara Hall, who also rewrote history on Sunday by setting the women’s American record at the half-marathon distance in Houston, attempted to lower Kastor’s long-standing American marathon record at The Marathon Project in December of 2020. Although unsuccessful in her attempt, finishing in 2:20:32, it was Neff who paced Hall throughout the race, bringing her through the halfway mark in 1:09:38–surgically close to D’Amato’s 1:09:40 halfway split in Houston on Sunday. D’Amato only sped up from there, splitting 1:09:32 in the race’s second half. She took to Instagram after the race to try to describe what the American record meant to her. She couldn’t.

“After a decade of wondering ‘what if,’ I finally found out. Still can’t find the words to describe what happened yesterday at the [Houston Marathon]. I’ll try again tomorrow.” she wrote.

Pacing D’Amato on Sunday was a redemptive experience, and an exciting day, for Neff, who can now say that he’s helped to pace two of the finest runners in the history of American women’s distance running.

About rabbit: rabbit is a female-founded, free-spirited, California running apparel brand that supports runners and dreamers of all levels. You can find rabbit at independent specialty running retailers throughout the nation or online at runinrabbit.com

View all Releases by Monica DeVreese