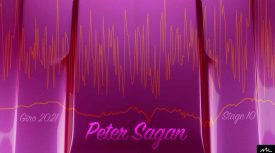 Bedford, Virginia (July 18, 2022) /ENDURANCE SPORTSWIRE/ – One of the most successful and popular pro cyclists to come around in many years, Peter Sagan, will launch his collection of NFT art as part of Project FUERZA. The power and biometric data-inspired NFT art program launched on July 1, with some of the most famous names in modern cycling; Sagan’s recent addition marks their largest, highest-valued collection to date.

Sagan quickly became a fan favorite when he burst on the pro road cycling scene in 2010, thanks to his bigger-than-life personality and seemingly superhuman ability to win in a wide variety of races. Working closely with Sagan, Project FUERZA’s artists took inspirations from both his gregarious personality, ridiculous power and biometric numbers, and incredible talent on almost any terrain to create this new NFT artwork.

“I love how my FUERZA NFTs have each been able to capture not only some of my passions outside of cycling, but also blow me away with the creativity of taking my power data and turning it into art,” says Sagan. “So many of my pieces are just so beautiful and I am excited to share these with my fans.”

The resulting images – in a combination of styles including pop art, modern, impressionist and others – are as striking visually as the information infused into them. For instance, in one classic pop-art style NFT, Sagan and the artist pay homage to a famous Sagan Tour de France victory where he actually unclipped from his pedal during the sprint, reclipped in, and won the sprint! The visuals tell the story with a cartoon-like “Pow” to show the mishap, laid over colorful graphic representations of his data that lend a frenetic feel to the work to mirror the mayhem of a pro cycling sprint finish.

Founder Hunter Allen, a longtime cycling coach and power-training guru, is honored to count Peter among the who’s-who of pro cyclists that have joined Project FUERZA.

“It’s been very exciting to work with Peter on these amazing pieces of art, all built around his unbelievable wattage – it’s hands down one of the best five-minute power outputs that I have ever seen. Working with seven different artists on our team has been a pleasure and we have come up with some outstanding works of art that will appeal to a wide audience, and we look forward to releasing more incredible art with him in the near future.”

There are 12 works available now in Sagan’s collection, but that will grow to around 50 over the next month or so. The first batch will include, among other major races, Sagan’s Tour of Flanders win in 2016, his first-ever Green Jersey win from Stage 2 of the Tour in 2012, and his first of three World Championship wins in 2015

Along with selling the original NFTs individuals, starting around $5000, FUERZA will also offer around 1000 variations (including data files) for $300 each. And for one lucky, and presumably well-funded superfan, Sagan will also offer his entire collection, once it’s complete, with a price tag in the multiple millions.

About Project FUERZA : www.ProjectFUERZA.com was created to share professional athletes’ biometric data in a truly unique piece of art that represents the rider and the event. The incredible human efforts from the hardest endurance sporting events in the world are memorialized in FUERZA NFTs; they’re meant to inspire and create emotion for all audiences through the imaginative works of art and the sheer physical efforts represented in the biometric data. Founded by the leader in power training, Hunter Allen, the team at Project FUERZA also create special in-person experiences with the riders, exclusively for the owners of FUERZA NFTs, that give unprecedented access to professional athletes around the world.

SoulCycle to hit brakes on nearly 25% of its locations