Oaktown Half Marathon Returns on August 12, 2018 with Fifth Anniversary Relaunch 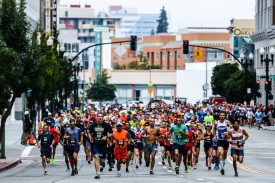 January 17, 2018 (OAKLAND) – The Oaktown Half Marathon, one of the most scenic races on the West Coast, will celebrate its fifth anniversary on August 12, 2018 when it re-launches under its original founder. To commemorate the occasion, the race formerly known as The Town’s Half will feature a new course, a new Oaktown Finish Festival, and a special fifth anniversary registration fee of $55.55 for the first 555 participants who register before 11:59 p.m. PST on January 17, 2018.

Originally launched in 2014 by Oakland sports marketing executive and CEO of Mascot Sports, Ryan Dawkins, The Town’s Half was acquired and then cancelled in 2017. Dawkins is now spearheading its return to fulfill his original plan of a runner-focused, hyper-local event in his hometown.

“We’re proud to bring the Oaktown Half back to the community on its fifth anniversary and reignite the excitement runners have for this event,” said Dawkins. “Runners will experience the best of what Oakland has to offer and like everything else in Oakland, it will never be ordinary and always unexpected.”

The Town’s Half inaugural saw incredible enthusiasm among the 1,700 runners who joined from 36 states and seven countries, and Dawkins’ new iteration of the race as the Oaktown Half Marathon aims to up the ante and continue to grow Oakland as a top running destination, alongside a partnership with Visit Oakland.

From the steps of City Hall in Frank Ogawa Plaza and Jack London Square to Uptown and Lake Merritt, the new course will enable visiting and local runners alike to experience the soul of the historic Bayside city whose motto is “Love Life”. Following the challenging but invigorating course, the Oaktown Finish Festival will feature food and craft beer from the some of the community’s most-loved locals to aid in runners’ celebrations.

In addition to giving runners a chance to experience some of the best sights and vendors the community has to offer, the new Oaktown Half will also be one of the easiest races to prep for in the country. Through an exclusive partnership with The RunnerBox, runners will receive an Expo-In-A-Box right to their front doors, delivering race packets and coveted expo giveaways.

The Oaktown Half is in partnership with the successful Oakland Turkey Trot and continues the nonprofit group’s efforts to raise impactful funds for Oakland Schools and Alameda County Community Food Bank.

To learn more and to register for the Oaktown Half Marathon, visit oaktownhalf.com.