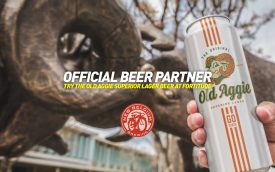 As the official beer partner of the FORTitude 10K, all participants 21 years of age and older will receive a complimentary can of New Belgium’s Old Aggie Superior Lager after completing the inaugural road race. Runners will also be the first to experience the New Belgium Porch at Colorado State University’s newly completed Sonny Lubick Field. The New Belgium Brewing themed tap room housed within the stadium will have its inaugural event hosting Fortitude runners.

“Our number one goal for the inaugural Fortitude 10K is to create a race that is unique to the runners of Fort Collins. We are thrilled to partner with New Belgium Brewing because of their impact and rich history in the Northern Colorado community,” said Cliff Bosley, BolderBOULDER race director. “New Belgium was a partner of the BolderBOULDER back when we ran the Bolder Bike Classic and we are really excited to be working with them again on this new endeavor.”

“Just as the Bolder Boulder is a perfect reflection of the city of Boulder, Fortitude 10K will allow Fort Collins to create its own unique, Fort Collins-flavored event,” said NBB spokesperson Tyler Weady. “As a craft brewer in our community, we’re honored to be able to add a little something special into the mix. This event is just one more element that makes our city such a special place.”

The first-ever FORTitude 10K is September, 4th 2017 and will take runners on a scenic yet altitude challenging course through Fort Collins, passing landmarks like City Park and the CSU Oval, as well as weaving through picturesque Avery and Mountain Ave. neighborhoods. The race will finish at the newly completed Sonny Lubick Field at CSU Stadium, and will be one the first opportunities for the community to experience the stadium.

Team BolderBOULDER is the owner and organizer of the BolderBOULDER Memorial Day 10K Classic named America’s All-Time Best 10K by Runner’s World. This race attracts over 50,000 runners, joggers, walkers and wheelchair racers, and draws professional athletes from around the world to compete for one of the largest non-marathon prize purses in road racing. This team also organizers the ColderBOLDER 5K on December 2, 2017 at the University of Colorado and new to 2017, the inaugural FORTItude 10K in Fort Collins, CO finishing at the newly constructed Sonny Lubick Field at CSU Stadium on Labor Day. For more information please visit: www.bolderboulder.com

Why Altra signing two pregnant runners is a big deal