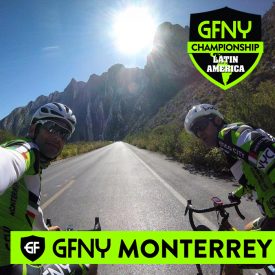 GFNY goes to Mexico this Sunday, February 25 where riders will compete for the GFNY Latin American Championship Crowns in Monterrey

The excitement of cyclists arriving in Monterrey for the inaugural GFNY Monterrey on Sunday has reached a fever pitch. The 2018 GFNY Latin American Championship will field 1500 riders from 25 nations. The Championship course in Monterrey, Mexico will start from the famous Cintermex and race through downtown Monterrey before heading north towards Chipinque Park, where the challenging climbing begins.

Compared to the 10% of finishers in each age group qualifying for the racer corral like at most GFNY World races, the GFNY Latin American Championship at GFNY Monterrey will offer double the spots: top 20% of age group finishers of the long route will qualify for the Racer Corral at the 2018 Campagnolo GFNY World Championship in NYC on May 20th.

“The GFNY Monterrey course is Championship-worthy, with a very challenging, famous climb, but also showcases the beautiful landscape Monterrey has to offer.,” said Lidia Fluhme, President and co-founder of GFNY. “Monterrey is an exciting metropolis that is a major tourism attraction not just for cycling but also entertainment, an ideal mix for being the host of the 2018 GFNY Latin American Championship.”

Monterrey is Mexico’s third largest city and offers a variety of outdoor adventures, boutique restaurants, nightlife and world-class museums – the perfect opportunity for families to travel together and enjoy a vacation before and after the race.