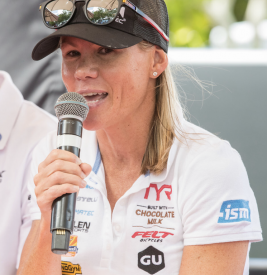 April 4th, 2019 – Three-time Ironman World Champion Mirinda “Rinny” Carfrae officially kicks off her 2019 season this weekend at Ironman 70.3 Galveston and shares the announcement of her full 2019 race schedule. As one of triathlon’s most accomplished professionals, Carfrae is excited to start the season and back on the road to Kona focused on her goal of another Ironman World Championship title in October. In 2018, Carfrae returned to full time racing after starting a family in 2017. Highlights of 2018 included Ironman 70.3 wins in Santa Rosa and Augusta and solid runner up performances all season including Ironman Asia Pacific Championships and a top 5 Kona finish after taking a full year off from training in 2017.

“I am so excited to get started again. I felt like I was really hitting my stride last year towards the end of the season in Kona and just missed the mark in my run fitness. My body really appreciated the year off in 2017 and I can’t wait to build off my successful 2018 return. This year I will be focusing on Ironman World Champs as my long-distance race to peak for. This will allow me to really work on leg speed at the half races and provide longer training blocks while balancing full-time racing and family,” states Mirinda Carfrae from Boulder this week.

Outside of Kona, highlights of Carfrae’s season include a travel trip to the Czech Republic to race Challenge Prague at the end of July. Rinny and husband pro triathlete Timothy O’Donnell will be traveling as a group and partnering with Challenger Tours to take care of all the logistics including air, bike and ground transport. Challenger Tours along with Rinny and Tim invite avid triathletes and fans to join them and experience the historic city of Prague and the amazing European triathlon fans without the headache of international travel challenges.

Mirinda’s selection of key Ironman 70.3 races are centered around her Kona bid in October while also allowing some solid training blocks in May and August. Once August training resumes Rinny’s sole focus will be on her the 2019 Ironman World Championship race in October.

The Tim and Rinny Show will continue into the new season with the first installment showcasing their time in Noosa. The internet show launched in 2018 and chronicled Rinny’s road back to full time racing after the birth of her daughter in 2017.  The show has become an internet sensation on youtube and Rinny’s social channels with regular episodes being released all year.   The Show will follow her to key races and to Boulder capturing an intimate glimpse into Rinny’s amazing career balancing her family and racing.