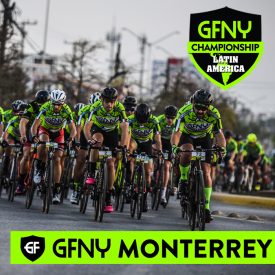 NEW YORK CITY, March 1, 2018 – It was a clean podium sweep for Mexico at the 2018 GFNY Latin American Championship, which was held at the inaugural GFNY Monterrey on Sunday, February 25.

Home favorites on both the men’s and women’s side showcased the depth and pedigree of Mexico’s cycling elite by dominating the inaugural GFNY Monterrey.

The race got off to a fast start with speeds averaging 48kph for the first 30 minutes. At km 30, a break was made by a group of five riders containing Miguel Arroyo Jr.

The lead group worked together and continued to steadily increase their advantage. The chase group, containing Flavio de Luna, defending champ of the GFNY Latin American Championship, realized they had let the breakaway go to far too soon. At km 80, they started working together to bridge the 6-minute gap. Immediately, De Luna and a few others shifted into low gears and the chase was on, with speeds averaging over 50kph.

At km120, the lead group was finally broken apart when Arroyo Jr lay down one final attack at the base of Chipinque. Arroyo Jr maintained a fast pace up the mountain but De Luna was gaining quickly.  So quickly that he took the KOM title, but he did not manage to catch Arroyo Jr.

Arroyo Jr took the 2018 GFNY Latin America Championship title in a scorching time of 3:23:37. He was followed less than two minutes back by Emilano Mirafuentes Resendez and a further minute back by De Luna rounding out the podium.

In the women’s race, it was a closely fought contest along the entire 124km race route, with Veronica Balderas edging out Ana De Leon for the title by 18 seconds in the climb to the finish line, in a time of 3:38:20. Maria Hernandez rounded out the podium for the women four minutes back, in 3:42:19.

Top 20% of age group finishers of the long route qualified for the racer corral at the 2018 Campagnolo GFNY World Championship in NYC, this coming May 20, 2018.

Safe Cycling Around The World Is Goal Of New Guide