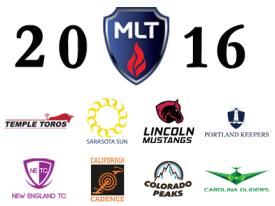 Major League Triathlon has announced its 2016 professional team rosters.  These eight teams of four will face off on four separate occasions throughout the year for the chance to take home the inaugural MLT Championship.

The team rosters are:

The four MLT events on the schedule for 2016 are:

The professional race will be the feature of the weekend, taking place on Saturday afternoon.  Amateur racing, live music, a beer garden, an expo, game zones, professional athlete interaction, clinics, talks, and more will round out the event schedule.

The pros will follow the Super Sprint Mixed Relay format.  Each of the team’s four members will complete a short swim, bike, and run circuit before tagging their next teammate in line to do the same.  The first team to have all four athletes cross the finish line will win.  The courses will be looped, making the races fun and easy to watch.  Excitement is building among MLT pros as the season’s first race approaches.

“The team relay is, in my opinion, the most exciting race in triathlon,” said US Olympic hopeful Ben Kanute of the Temple Toros. “I love how fast paced it is, and how much can change in such a short time.  I am excited to see how the US crowds will react!”

Registration is now open for MLT’s amateur races in Temple, Texas.  Sprint and Olympic distances will be offered for both individuals and relay teams.  Registration can be accessed directly through TriReg:

View all Releases by Daniel