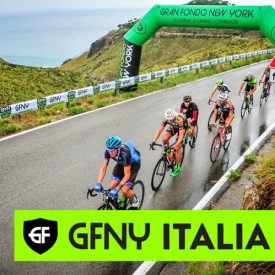 Riders from across the globe experienced the authentic Italian granfondo

NEW YORK CITY, September 21, 2016 – Riders from the US, Canada, Brasil, Mexico, Nigeria and all over Europe experienced a true Italian granfondo at GFNY Italia. And they had to work hard to earn their finish. After four rain free months, the Lazio region was battered by rain this past Sunday. While riders did not get to enjoy the spectacular views along the course, in particular the incredibly stunning Sperlonga climb, most embraced the added challenge knowing the race will be one to remember.

Italian granfondos are known for one pace: “a tutto gas”, all out. During the initial five neutralized kilometers on the world’s oldest road “Via Appia”, the pace was already set by the lead moto at a staggering 45km/h. When the race was opened, speeds quickly hit 55km/h with numerous attacks on rain flooded roads. Expectedly, none of them were successful until the Sperlonga climb 15km into the race where the peloton split into small groups.

A lead group of 12 riders formed and stayed together also across Passo San Nicola and the Vallecorsa climb. Federico Colone (Evonacicli) won the sprint on Via Appia in Terracina after 125km of racing with 1,750m of climbing in 3:21:00. Second place went to Matteo Cecconi (Vigili del Fuoco Viterbo) ahead of Francesco Cipoletta (Pro Cycling).

“I train on the course all the time so it’s awesome to win here,” said Colone. “And I’ll keep training on the course to be ready to also win at the GFNY World Championship in NYC this coming May.”

“For 2017, we’ll offer a completely new GFNY experience in Italy,” added GFNY President Lidia Fluhme who won her age group. “From March 12-19, riders can enjoy four days of training and three days of stage race: an uphill ITT through Terracina’s historic old town to the 2000-year old Jupiter Temple, a circuit race and the traditional granfondo.”

While only few riders were in the hunt for the overall win, many aimed to finish among the top 10% of finishers in their category to qualify for a racer corral spot at the GFNY World Championship in NYC on May 21, 2017. The next chance to qualify will be the inaugural GFNY Indonesia on October 2, 2016.