LONDON / TAMPA, Fla. (April 7, 2021) – Following the completion of the first round of the IRONMAN® VR™ Team Challenge that featured teams from North America, the competition will head oversees to Europe, Middle East & Africa (EMEA) bringing a new region into the mix. The new live broadcast racing format focuses on three teams of age-group athletes that will compete and be broadcast exclusively on the IRONMAN Now Facebook Watch page. The three-month-long IRONMAN VR Team Challenge consists of three, three-week competition cycles which first began on March 17, 2021, pitting athletes from the North American region, before moving to EMEA and then Asia-Pacific. All eyes are now on EMEA as the region showcases its three teams who will battle it out for bragging rights over three weeks beginning on Thursday, April 8. A preview show to introduce the team captains will air on Wednesday, April 7 at 8 p.m. GMT (3 p.m. ET).

The EMEA competition cycle will consist of three teams of age-group athletes who will race in Sprint, Olympic, and Half Distance virtual duathlons. The teams will be captained by former Welsh international professional rugby union player Shane Williams, heart transplant and motivational speaker Elmar Sprink and IRONMAN®World Champion, IRONMAN 70.3 World Champion and IRONMAN African Championship age-group winner Michelle Enslin from South Africa. Notable professional triathletes will also be featured each week providing the teams an opportunity to bolster their scoring with Pro Wild Card Lifelines while engaging with the teams on the broadcast. Following the EMEA IRONMAN VR Team Challenge, the competition will continue with three teams from Asia-Pacific in the following weeks to come.

“We are extremely excited to showcase the EMEA region in the next installment of the IRONMAN VR Team Challenge, we have a great line up of team captains and look forward to following their progress as they battle it out for the regional bragging rights,” said Stefan Petschnig, Managing Director of IRONMAN EMEA. “Each team captain brings a wealth of experience in different aspects, from dealing with the pressures of playing international rugby in front of thousands of spectators on the world stage, to conquering the IRONMAN World Championship and winning her age group, to an athlete with an incredible story of overcoming obstacles and inspiring people every day. We are in for a thrilling and entertaining IRONMAN VR Team Challenge. We look forward to the next three weeks.”

The next IRONMAN VR Team Challenge will be broadcast starting with a preview show on Wednesday, April 7 at 8:00 p.m. GMT (3:00 p.m. ET) with the first EMEA featured region competition taking place on Thursday, April 8 at 8:00 p.m. GMT (3:00 p.m. ET). IRONMAN VR Team Challenge can be viewed on the IRONMAN Now on Facebook Watch page by visiting www.facebook.com/IRONMANnow.

The three-week EMEA competition cycle features three age-group Team Captains who will be required to complete the respective virtual events for that week (Sprint, Olympic, Half Distance). Additionally, each week, the captain will be tasked with forming a team of two athletes to join them for the weekend duathlon competition with the identified team members completing one of the disciplines (i.e. one biker and one runner). There will be no swim portion for the EMEA competition. There will also be two professional athletes joining the EMEA regional showcase as part of the challenge. Notable professional athletes will provide the opportunity to bolster the scoring with Pro Wild Card Lifelines while engaging with the teams on the broadcast. The professional athletes will join in the competition by posting a single sport split for either the bike or run segments. Team captains will have one opportunity during their three-week competition to swap one of their split times with a coordinating split time from their pro ambassador athlete, prior to the time being unveiled, allowing them to better their overall team time and performance.

Representing EMEA as Team Captains will be former international professional union rugby player Shane Williams, heart transplant athlete and inspiring keynote speaker Elmar Sprink and IRONMAN World Champion, IRONMAN 70.3 World Champion and IRONMAN African Championship age group winner Michelle Enslin. These captains will be tasked with forming a duo of athletes to join them each week for the competition scoring. Team Captains for the EMEA region to include:

Team Captains for Asia Pacific IRONMAN VR Team Challenge triathlon will be unveiled in the weeks to come. 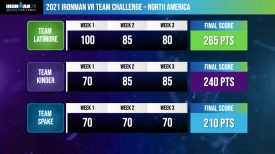 Each region competes in its own three-week-long competition and consists of a Sprint, Olympic and Half-Distance virtual triathlon simulation. The teams from North America competed during round one in a triathlon format on March 18; EMEA will take part in round two in a duathlon format starting April 8 and Asia Pacific will begin their portion of the competition on May 6. In addition to watching the live racing unfold, viewers of the broadcast are able to engage through live interaction consisting of challenges, Q&A, and voting polls. At the end of each three-week regional challenge, the Champion Team Captain is announced. The winner is decided by whichever captain has the most cumulative points at the end of the three-weeks of competition. Team captains set up IRONMAN Foundation Your Journey, Your Cause fundraising campaigns where they are be able to collect donations for a charity and cause that is important to them. The winning team from each regional showcase will receive a $5,000 donation from the IRONMAN Foundation to further grow their Your Journey, Your Cause fundraising campaigns.

Scoring will be based on:

For additional details on the IRONMAN VC platform, visit www.ironmanvirtualclub.com/. Questions about the IRONMAN Virtual Racing Series can be directed to ironmanvr@ironman.com.

For more information on the IRONMAN brand and global event series, visit www.ironman.com. Media related inquiries may be directed to press@ironman.com.

The IRONMAN® Virtual Club™ (VC™) brings the global IRONMAN® community together virtually week-after-week. Launching in April of 2020, the platform gives athletes from around the world access to IRONMAN U Certified Coach curated workouts, training resources, and challenges that prepare athletes to compete in the IRONMAN Virtual Racing™ (VR™) Series. Athletes have the opportunity to train, compete, earn, and be rewarded as they set their goals towards a successful year of racing. In addition, through the Race Honorably campaign, IRONMAN’s goal is to provide an exceptional virtual racing experience with credible results that requires athletes to do their part by entering accurate data. Additional details about the IRONMAN VC platform can be found at www.ironmanvirtualclub.com/.

About the IRONMAN Foundation

The IRONMAN Foundation creates positive, tangible change in race communities by engaging athletes and volunteers to participate in programs that demonstrate service through sport and commitment to community. Since 2003, over $50,000,000 has been provided through giveback programs led by the IRONMAN Foundation to more than 9,500 local, regional, national and global nonprofit initiatives. Through these partnerships, IRONMAN and Rock ‘n’ Roll Marathon Series participants are powerfully linked to the community and together help leave a positive legacy behind in race communities long after event day. For more information on IRONMAN Foundation programs, including TEAM IMF, Community Fund, Rock This Town®, Your Journey Your Cause, and Women For Tri, visit www.ironmanfoundation.org.

The IRONMAN Group operates a global portfolio of events that includes the IRONMAN®Triathlon Series, the IRONMAN®70.3®Triathlon Series, the IRONMAN®Virtual Racing™ (VR™) Series, 5150™ Triathlon Series, the Rock ‘n’ Roll®Running Series, the Rock ‘n’ Roll Virtual Running™ Series, IRONKIDS®, World Triathlon Championship Series, premier running events including the Standard Chartered Singapore Marathon™ and The Sun-Herald City2Surf®, Ultra-Trail®World Tour events including Tarawera Ultra and Ultra-Trail Australia™, mountain bike races including the Absa Cape Epic®, road cycling events, and other multisport races. The IRONMAN Group is the largest operator of mass participation sports in the world and provides more than a million participants annually the benefits of endurance sports through the company’s vast offerings. Since the inception of the iconic IRONMAN®brand and its first event in 1978, athletes have proven that ANYTHING IS POSSIBLE®by crossing finish lines around the world. Beginning as a single race, The IRONMAN Group has grown to become a global sensation with hundreds of events across 55+ countries. The IRONMAN Group is owned by Advance, a private, family-owned business. For more information, visit www.ironman.com.