Inaugural GFNY Mexico City to be held on June 26, 2016 on fully closed roads 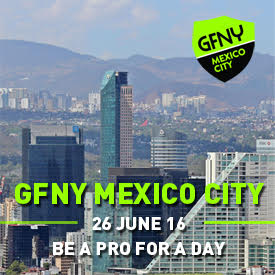 NEW YORK CITY, December 21, 2015 – The inaugural GFNY MEXICO CITY will be held on June 26, 2016 with two distance options of 81miles/130km and 61miles/100km, both fully closed to traffic. The routes start in the heart of Mexico City in front of the Angel of Independence, one of the country’s most significant landmarks. The races finish atop Ajusco mountain, situated at the breathtaking height of 3,500m/11,500ft, overlooking the city. 3,000 riders are expected at the inaugural edition, which will make this race the largest ever held in Latin America.

“The team at Paradise Sports has done a tremendous job in establishing GFNY in Mexico with GFNY Cozumel,” says GFNY President Lidia Fluhme. “Now with the addition of a second GFNY in Mexico, the GFNY World series will have yet another race in Latin America after Cozumel, Colombia, Argentina and Punta del Este/Uruguay. GFNY Mexico City will be an amazing experience for our riders who get to race on closed roads from the city into the mountains.”

All GFNY World events are true cycling marathons that offer cyclists start-to-finish timing, closed roads or police-moderated course control, ranking based on finish time, age group awards, a consistent set of rules and a great tourism and family experience. GFNY is dedicated to providing cyclists a memorable and challenging cycling experience in unique locations and to growing the global footprint of GFNY with more events.

“After two extremely successful editions of GFNY Cozumel, it’s time to bring GFNY to Latin America’s 2nd largest city,” adds Paradise Sports co-founder Shaun Gad. “Competitive mass participation cycling is finally coming to Mexico City. We are thrilled to bring such a prestigious event like GFNY to a financial and cultural capital like Mexico City. The event will be the largest bike race ever held in Mexico – and will be the highest race in the world.”

Registration for the race is available at gfnymexicocity.com.