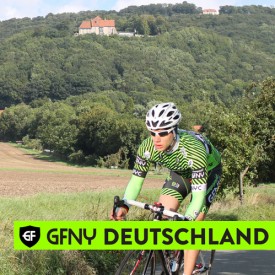 Athletes set to compete on 160km and 80km courses

NEW YORK CITY, August 25, 2016 – The inaugural GFNY Deutschland is set to take place in the picturesque town of Hameln in Northern Germany this Sunday August 28, 2016. The fully closed to traffic course offers exceptional riding and racing for anyone. Smooth roads, lots of hills and beer at the finish will ensure that riders from across the world get a proper German cycling experience.

In Germany, the so-called “all-comer races” have become very popular because they offer more interesting courses than traditional licensed racing which is often limited to criterium or circuit racing. But despite their name, these races are only open to non-racing license holders. This has created controversy in recent years when riders and even whole teams have organized themselves specifically around all-comer races. By that, the original idea of having races for casual riders failed. Today, all-comer races are de facto elite level road races, held parallel to licensed races.

“GFNY has globally always positioned itself as a race truly for everyone, whether beginner or professional,” says GFNY CEO Uli Fluhme. “And we’re not going to change that in Germany. At GFNY Deutschland, every rider – racing license or not – is welcome to Be a Pro for a Day.”