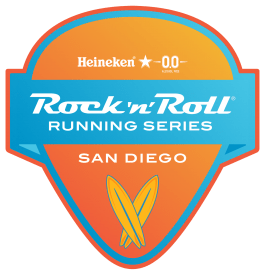 The Heineken 0.0 Rock ‘n’ Roll® Running Series San Diego had the largest elite field to date for the Rock ‘n’ Roll Elite™ half marathon series, which launched in February and aims to offer world-class runners the opportunity to showcase their talents and profile on a consistent series wide scale. Elite runners from around the world competed for a share of the $12,000 prize purse as well as Elite Beat Rankings (EBR). Contested across the half marathon distance, each of the eight events in the series will offer a prize purse awarded to the top three male and female elite finishers, as well as points toward the Elite Beat Rankings (EBR), earning the opportunity to compete for the bonus pool in the grand finale at the 2023 Rock ‘n’ Roll Running Series Las Vegas.

In the half marathon race, Reid Buchanan (San Diego, Calif.) came home victorious for the men clocking a time of 1:04:01. Wan Won (San Diego, Calif.) was second with a time of 1:04:57 and Rene Ortiz (Rio Verde, Mexico) followed in third place finishing in 1:05:02. Jane Bareikis (Crestwood, Ill.) was the women’s half marathon winner with a final time of 1:14:48 with Nina Zarina (Arlington, Va.) behind finishing in second with finishing time of 1:15:56 and Valerie Sanchez (Los Angeles, Calif.) rounding out the podium in 1:17:14.

“I live in North Park, so it was fun running through all the neighborhoods that I know, but there are more hills downtown than you’d think until you run it,” said Reid Buchanan, who ran the majority of the half marathon with his competition 1 minute or more behind him. “I’ve also been a spectator of this race and it gets really lively.”

“My parents did this race 15 years ago and I always wanted to come back and do it myself,” said Kellen Blumberg, the men’s marathon winner who grew up in San Diego. “This is my first time running Rock ‘n’ Roll San Diego and I’m glad I got the win.”

Leading runners through San Diego’s most iconic neighborhoods, Sunday’s events took off from the historic start line at Balboa Park and traveled through Hillcrest, North Park and Normal Heights before the marathon broke off from the half marathon just past mile 8. The marathon route also ran through Mission Hills and Old Town before both distances finished downtown at Waterfront Park.

Bringing Fun to the Run® since 1998, race day brought more than just fast times as several local bands, including Bobby Tunes, Sonic Tonic, The Surf Birdz, Naruwan Taiko’s Japanese drums, and many more, performed live on band stages along the route interspersed with cheerleaders and crowd support. Runners also enjoy on-course entertainment by local Drag Queens as well as Anchorman and Top Gun impersonators. Matisyahu took the stage at Waterfront Park as the headliner of the finish line concert.

The IRONMAN Group operates a global portfolio of events that includes the IRONMAN® Triathlon Series, the IRONMAN® 70.3® Triathlon Series, the IRONMAN® Virtual Racing™ (VR™) Series, 5150™ Triathlon Series, the Rock ‘n’ Roll® Running Series, the Rock ‘n’ Roll Virtual Running™ Series, IRONKIDS®, World Triathlon Championship Series, premier running events including the Standard Chartered Singapore Marathon™ and The Sun-Herald City2Surf®, UTMB® World Series events including Tarawera Ultra and Ultra-Trail Australia™, Epic Series™ mountain bike races including the Absa Cape Epic®, road cycling events including Haute Route®, and other multisport races. The IRONMAN Group is the largest operator of mass participation sports in the world and provides more than a million participants annually the benefits of endurance sports through the company’s vast offerings. Since the inception of the iconic IRONMAN® brand and its first event in 1978, athletes have proven that ANYTHING IS POSSIBLE® by crossing finish lines around the world. Beginning as a single race, The IRONMAN Group has grown to become a global sensation with hundreds of events across 55+ countries. The IRONMAN Group is owned by Advance, a private, family-owned business. For more information, visit www.ironman.com/about-ironman-group.