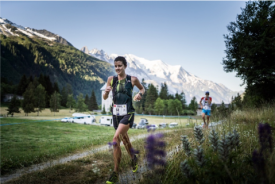 CHAMONIX, France (June 26, 2019)— The 2019 Golden Trail World Series touches down in the legendary mountain town of Chamonix in the French Alps this weekend for the Marathon du Mont Blanc, the second stop on the series. This year, a brutal heatwave has arrived across much of France, which should make a challenging race even more so for both the elites and the avid runners who toe the starting line in the 26-mile race, which is the premier event in a full weekend of trail running competition.

The first race of the Golden Trail World Series at the Zegama-Aizkorri Mountain Marathon on June 2 was won predictably by Kilian Jornet (Team Salomon) on the men’s side and, in a huge surprise, by Norway’s Eli Anne Dvergsdal on the women’s side. In Chamonix, the men’s field is wide open with Jornet choosing to sit out this year’s race, while a host of top women will look to test Dvergsdal as she runs just her second-ever marathon, Zegama being her first.

The relatively flat first half of the course usually means a fast early pace that allows certain runners the opportunity to surge to the front, though that could change in the heat. This year look for Americans Andy Wacker (Team Nike) and Cole Watson (Team Hoka), as well as Italy’s Francesco Puppi (Team Hoka), to push the pace early.

Three runners from Team Salomon—Poland’s Bartlomiej Przedwojewski, France’s Thibaut Baronian and Norway’s Stian Angermund-Vik—will all be favorites when things start to shake out on the hills. Przedwojewski will make his first start at Marathon du Mont Blanc after a second-place finish at Zegama. Meanwhile, Baronian is coming off an impressive third-place effort at Zegama and will be running in front of his countrymen where he finished fourth a year ago. Angermund-Vik, the champion of the inaugural Golden Trail series in 2018, is as consistent as anyone in the sport and finished third in Chamonix in 2018.

In the women’s race, the aforementioned Eli Anne Dvergsdal (Team Salomon) will look to grab her second win in a month, but defending Marathon du Mont Blanc champion Ruth Croft (Team Scott) of New Zealand will make her first appearance of the 2019 Golden Trail World Series. Croft won the series overall title in 2018. Last year in Chamonix, she ran away from the competition in the latter portion of the race and set the stage for a great season.

The elite runners will be trying to earn points in the season-long chase for a spot in the Golden Trail World Series Grand Final, which will take place in Nepal in October. The athletes must participate in three of the six races during the series in order to be eligible for the final. The top-10 men and women with the most points in their three best races will earn a trip for themselves and a person of their choice to the Grand Final. The overall final standings (and the men’s and women’s champions) of the Golden Trail World Series will be determined again by the runners’ three best finishes during the season, plus their results at the Grand Final.

LIVE BROADCAST OF MARATHON DU MONT BLANC
The entire Marathon du Mont Blanc will be broadcast in real time on the Golden Trail Series and Salomon Facebook pages, as well as on the new Golden Trail Series YouTube channel. Salomon trail running athlete Marc Lauenstein, who will miss the race due to injury after finishing second last year, will co-host the broadcast with Martin Gaffuri. A French broadcast will be co-hosted by Michel Lanne and Hugo Ferrari on the Marathon du Mont Blanc Facebook page. With a strong team of camera operators stationed along the entire course and others using e-bikes to follow the runners, the broadcast will capture the race as it unfolds.