GFNY March Madness kicked off with a GFNY Super Sunday 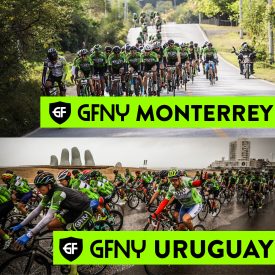 An exciting weekend of GFNY racing saw domination from Mexico at GFNY Monterrey and Brazil at GFNY Uruguay.

NEW YORK CITY, March 20, 2019 – Domination across the podiums from Mexico in Monterrey and wins from Brazilians Ricardo Leito and Flavia Lorenzetti in Uruguay completed an exciting weekend of GFNY racing.

The second edition of GFNY Monterrey began with a controlled start inside the famous Parque Fundidora. Once riders reached the park gates, the heat was on. A lead pack containing 150 riders rolled at 55kph on the express lane in the heart of Monterrey.

The attacks started 5km into the race. Two riders escaped and created a two-minute gap from the peloton. It wasn’t until km 65 that the two sole leaders were caught.

At the head of the peloton, Miguel Arroyo (2018 GFNY Monterrey Champion) put in a hard attack taking with him two riders – one of them his brother, Fernando Arroyo – to chase down the two leaders.

The two became a group of five while two more riders separated from the main group and bridged the gap to the leaders.

Fernando Arroyo was first onto the climb to top of Chipinque and the finish line. His lead unassailable, he went on to take the victory in 3:21:43. Miguel Arroyo and Jose Manuel Fernandez fought it out on the climb but their battle for runner-up ended in an amazing sprint finish with Miguel Arroyo edging out Fernandez by 100th of a second in 3:24:44.

The women’s race was dominated by Mexicans. Ana Cecilia de Leon Martinez took the win in 3:41:59. Second was Maria Del Rosario Gonzalez Hernandez in 3:43:23. Rounding out the podium, Monserrat Camargo crossed the line in 3:46:16.

A controlled start was also implemented in Uruguay. For 5km, 400 riders had a gentle warm up while passing through Punta del Este’s port and surrounding peninsula. Upon reaching the iconic Los Dedos sculpture, the race was declared on.

During early kilometers along ocean roads, warm temperatures were cooled with a bout of heavy rain. Upon reaching Route 9, the rain dissipated and a peloton of fifty plus riders hit the gas, maximizing on tail winds and the rolling roads all the way through to Route 12.

10km into the breathtaking landscape of the Sierra del Carapé, the lead peloton was reduced to nine who were able to hold onto the pace imposed by local riders Gustavo Aquino, Tomás Silva and Hernan Silvera. They were joined by five Brazilian riders: Luis Amorim, Fabio Silva, Fernando Magalhaes, Ricardo Leite and Orlando Alves.

Youngsters Silvera and Silva attacked several times but were neutralized by the chase group. It was not until the last climb of the day, La Ballena, with stunning ocean views and 6km to the finish when the eight chasing riders sighted leader Alves.

After 102km of racing alone, Alves was caught just 3km short of the finish. From that point on, it was about who had the legs for a final sprint to the line. Brazilian rider Ricardo Leito was victorious in 4:46:32, followed by Punta del Este local, Hernan Silvera (4:46:33).

In the women’s race Brazilian Flavia Lorenzetti rode away with the victory in 5:18:11. Fifteen minutes back, local hopeful Carolina Freire crossed the line in 5:33:19. Paula Fanti from Argentina rounded out the podium in 5:42:02.

Next up is the GFNY Latin America Championship Colombia this Sunday where a sold out field of 2200 riders tackles granfondo’s highest climb, the 3365m high La Cuchilla.