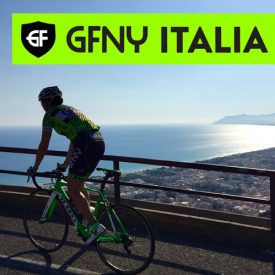 3 days of racing including time trial, circuit race and granfondo

NEW YORK CITY – The global cycling marathon series GFNY expands its repertoire of races with a three-day stage race held in Terracina, Italy on March 17-19, 2017. Riders get to compete in an uphill time trial that finishes at the 2000-year old Jupiter Temple, a flat-n-fast circuit race and the classic GFNY Italia granfondo course. Additionally, GFNY Italia offers a 5-day supported cycling training camp in the days leading up to the race.

“Offering stage races as part of GFNY is a natural expansion for us,” says GFNY CEO Uli Fluhme. “Everything we do at GFNY is out of our personal passion for the sport. We love stage racing ourselves and the unique challenges it brings. GFNY’s roots are in Italian cycling culture, which made Terracina the obvious choice for the first GFNY stage race.”

The host town, Terracina, in Italy’s Lazio region is situated just 100km south of Rome and its two major airports. The first GFNY World event outside its home in NYC was held there in September 2014. The March 2017 event will mark the 4th annual edition of GFNY Italia.

The GFNY Italia Camp offers 5 days of supported group rides from March 12-16 on the numerous flat and hilly roads around Terracina. Riders get to enjoy the ultimate Italian cycling experience and to prepare for their early season goals, whether it’s the GFNY Latin America Championship in Mexico City on March 26 or the Campagnolo GFNY World Championship in NYC on May 21.

“We spent several winters in Terracina because we adore its mild climate that allows for year-round cycling,” adds GFNY President Lidia Fluhme. “It’s no surprise that several Italian pro teams choose the region for their pre-season camps.”

“There are many tour operators that offer a bike touring experience in Italy that is centered around eating rather than riding. But there are very few that offer authentic cycling to experienced riders and racers. We have enjoyed living and riding in and around Terracina so much over the past 5 years that we want to give GFNY riders the chance to get a taste of that as well.”