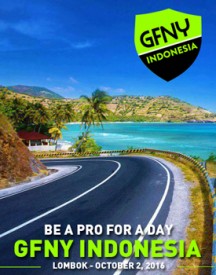 The inaugural GFNY Indonesia will be held on October 2, 2016

NEW YORK CITY, October 15, 2015 – The inaugural GFNY Indonesia is set to take place on Lombok, the island 35 miles east of Bali, on October 2, 2016. This event marks the expansion of the GFNY World series into Asia. While Gran Fondo New York and its GFNY World events have welcomed cyclists who traveled to the events from Singapore, Thailand, Japan, China, Hong Kong, Indonesia, Malaysia, Taiwan, South Korea and the Philippines, GFNY Indonesia now offers a local event to the rapidly growing endurance sports community in Asia.

“In just 2 short years, GFNY World has expanded from one race, Campagnolo Gran Fondo New York, to a global cycling series of 10 races on 4 continents. And we’re just getting started,” says GFNY President Lidia Fluhme. “We’re very excited to announce GFNY Indonesia to fans of Gran Fondo New York who live in Asia, as well as cyclists from other continents who want to travel and explore new parts of the world on their bike.”

All GFNY World events are true cycling marathons that offer cyclists start-to-finish timing, police-moderated course control, ranking based on finish time, age group awards, a consistent set of rules and a great tourism and family experience. GFNY is dedicated to providing cyclists a memorable and challenging cycling experience in unique locations and growing the global footprint of GFNY with more events.

“I have extensive experience with organizing long distance cycling events in Indonesia,” adds GFNY Indonesia founder Axel Moeller. “With GFNY, we’re now bringing competitive cycling to Lombok. The host town of Senggigi offers a series of sweeping bays, with light-sand beaches sitting below a backdrop of jungle-clad mountains and coconut palms. Riders can expect a typical GFNY event: police moderated traffic, timing start to finish and results based on time.”

Registration for the race is available at gfnyindonesia.com.

About Gran Fondo New York
The 6th annual Campagnolo Gran Fondo New York on May 15, 2016 will also be the second annual GFNY Championship. The race features the world’s most international peloton with riders from over 70 countries. Athletes take on a challenging 100-mile route from NYC to Bear Mountain and back to compete against each other, the clock and themselves in a personal endurance challenge.

GFNY WORLD now features events in Italy, Germany, Mexico-Cozumel, Argentina, Colombia, Indonesia and at Mont Ventoux/France. Riders there have a chance to qualify for the elite racer corral at the GFNY Championship in NYC by placing in the top 10% of their age group.