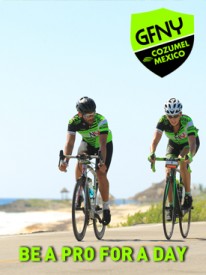 NEW YORK CITY, November 18, 2015, The second annual GFNY Cozumel bike race is scheduled for November 22, 2015 in Cozumel, Mexico. Race participants will ride on fully closed roads to be able to focus on competing and enjoying the event. 1500 Athletes from 35 countries such as South Africa, Australia, USA, Canada, UK, Poland, Netherlands, Germany and across all Latin American countries are registered for the race.

Riders have the choice between the 100mi / 160km “long route” (two loops of the island) and the 50mi / 80km “medium route” (one loop). Both routes start and finish in the heart of the town of San Miguel de Cozumel and circumnavigate the island through tropical rain forest and along the 20-mile-long spectacular oceanfront on the island’s uninhabited east coast.

While the course is completely flat, trade winds and the hot caribbean sun add two unique challenging elements for all participants.

In the men’s race, another Colombian will try to dethrone GFNY Cozumel 2014 champion, Mexican Yayir Jimenez: Gabriel Corredor, 2014 GFNY NYC winner and climber extraordinaire will have to show that he is strong on flat and windy terrain as well. A sprint finish from a small group might be in the cards and could present a surprise winner such as Mexican Tony Esposito. He finished 8th last year but has trained harder than ever to improve on last year’s result.

For the age groupers in the peloton, GFNY Cozumel serves as a qualifier for the racer corral at the GFNY Championship in NYC on May 15, 2016. The top 10% in each age group earn one of the coveted spots in the front of the 5000 rider peloton in NYC.

Special experiences await all GFNY Cozumel 2015 participants, with a large, 2-day pre-race expo, a carbo loading party on Friday evening, a Parade of Nations and Teams on Saturday afternoon, and post-race meal and after party at Hard Rock Cafe Cozumel.

Like at all GFNY World events, participants are individually chip timed start-to-finish and are ranked based on their total finish time overall and by age group. All finishers receive medals to commemorate their achievement.

GFNY WORLD now features events in Germany, Italy, Indonesia, Mexico-Cozumel, Argentina, Colombia, Mexico City and at Mont Ventoux/France. Riders there have a chance to qualify for the elite racer corral at the GFNY Championship in NYC by placing in the top 10% of their age group.