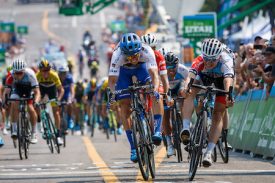 Both Canadian teams have new title sponsors and have Tour of Utah alumni on their rosters. Through an agreement between team sponsors, Floyd’s Pro Cycling will race under the name Worthy Pro Cycling at the Tour of Utah. The team features sprinter Travis McCabe (USA), who has amassed four stage wins in Utah in the past three years. He is the reigning USA Cycling Pro Criterium National Champion, having won this title for a second time on June 28. Among his teammates who scored top honors at the 2017 Tour of Utah are Serghei Tvetcov (Romania), who finished third on the General Classification (G.C.) riding for Jelly Belly Pro Cycling, and Jonny Clarke (Australia), who was seventh on G.C. riding for UnitedHealthcare Pro Cycling.

Participating on DC Bank Pro Cycling, which had been H&R Block Pro Cycling, is former U.S. Pro Road Race national champion Greg Daniel, who won the King of the Mountains classification at the 2015 Tour of Utah while riding for Axeon-Hagens Berman. Dauner l AKKON Pro Cycling has riders from four countries, with the lone American being Oliver Flautt, who has had success in the U.S. riding last year for the Domestic Elite team Cyclus Sports. Canel’s-Specialized Cycling is the only Mexican club with a Continental license. Last year the team finished sixth overall in the UCI America Tour rankings, and this year features 10 riders representing Chile, Colombia and Mexico.

“We have attracted a talented international field for this year’s Tour of Utah with teams representing seven countries,” said John Kimball, managing director of the Larry H. Miller Tour of Utah. “We anticipate a great week of racing among these 17 teams and about 120 riders. It’s a special opportunity for us to bring world-class cycling to Utah and share this unique sports event with different host communities.”

Among the riders on the rosters of these 17 teams, they have a combined total of 42 stage victories and classification titles at the Tour of Utah since 2011, the year the Tour was elevated internationally by the Union Cycliste Internationale (UCI). Teams can carry up to seven riders on each roster, with the projected lineup of athletes to be announced in early August.

The UCI Pro Continental team Manzana Postobon (Colombia) was announced in April as participating at the Tour of Utah. The team has discontinued operations for the 2019 season and will not take part in any UCI races.

The Tour of Utah will begin on Aug. 12 at Snowbird Resort for a prologue (short time trial), one of four ski resorts that is part of the event. The Tour will conclude on Aug. 18 in Park City. Additional host venues are North Logan City, Brigham City, Powder Mountain Resort, Antelope Island State Park, North Salt Lake, Salt Lake City, and Canyons Village at Park City Mountain. 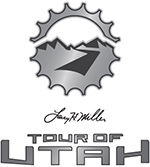 More than 822 million activities: 2019 Year In Sport data from Strava