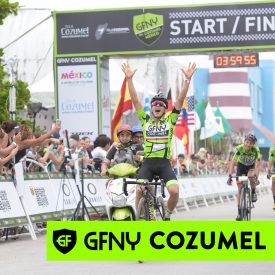 From the start, a group of 100 riders quickly formed a tight lead pack in the men’s race. As the group headed over to Punta Sur, on the south side of the island, riders were racing at speeds in excess of 55kph.

Colombian World Tour pro Jarlinson Pantano (Trek Segafredo) tried to make an early break and shake up the group but his effort was in vain and he was sucked back into the peloton.

By kilometer 140, Cozumel’s (in)famous winds whittled the group down to 25 riders. In the pack was defending champion, Mexican Flavio De Luna, who continued to ride a smart tactical race, staying safely in the main group and saving his attack for the final push to the finish.

In the last 5km, a group of 10 were in the hunt for the win but it was De Luna who took the last corner to the finish ahead of everyone to win the race in 3:59:04. Two bike lengths behind, Alberto Covarrubias (MEX) took third and Brazilian Joao Vitor Fernandes rounded out the podium.

In the women’s race, four women rode and worked together until the final 10km. The group consisted of defending champion Celine Scharer (SUI), Julyn Aquila (MEX), Yuseli Soto (MEX), Gabriela Diaz (MEX). Scharer looked on track to repeat until she collided with another rider and was unable to continue, suffering a fractured ankle only 10km from the finish. It left the three remaining Mexican ladies to battle it out in a sprint finish with Soto the victor in a time of 4:01:35. Aquila took second and Diaz third.

The top 10% of finishers in each age group qualified for the racer corral at the Campagnolo GFNY World Championship in New York City next May 20, 2018.

Next up is the final GFNY race of the year, the inaugural GFNY Chile on November 26.