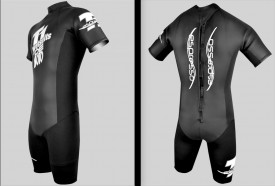 Trademarks are rather straightforward.  One may think that De Soto making a wetsuit called “Espresso” and Phelps making swimwear called “Xpresso” would be not be in contention given both the names and products are different.  Not so.  According the U.S. Patent and Trademark Office, both names are classified as apparel in USPTO Class 25.  The names may be found to be confusingly similar by the average person, regardless of the spelling.

“We own a number of trademarks and patents, all of which we consider to be valuable assets to our company,” says Founder, Emilio De Soto.  “So when someone called us to state they are not happy with Phelps’ transgressions, wondering if their T1 Espresso is was related somehow to Phelps, we said no and immediately contacted Aqua Lung. Preferring to proceed in a non-litigious way, we quickly negotiated an agreement resolving all possible infringement issues.”

Resolving things in an amicable way that benefits of both companies is an opportunity that De Soto wouldn’t allow to pass.  As per the agreement, De Soto has stopped producing products with the Espresso name, and is currently selling off its remaining stock of T1 Espresso Wetsuits for 60% below MSRP and more.  For details on buying one at a drastically reduced price, contact@desotosport.com

View all Releases by De Soto