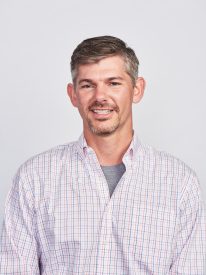 During his 5+ years at Zwift, Renton presided over a 10x increase in users and helped secure more than $770 million in funding. More broadly, Renton scaled Zwift’s organization and product to meet exceptional demand by integrating its game, events, and hardware touchpoints. He also helped advanced Zwift’s esports offering, which has grown to become a substantial discipline within cycling. This led to banner events like the UCI Esports World Championships, now in its third year; the Tour de France Virtual, held during the pandemic when the TdF was canceled for the second time in over 100 years; and the eventual launch of the real-world Tour de France Femmes avec Zwift.

“So many industries are evolving right now, especially sports and fitness,” says Renton. “I believe that one of the biggest and most exciting areas of this evolution is in biometric data. For years, the status quo of wearables has been activity trackers worn on your wrist. The next generation of fitness technology is biosensors – devices that provide a new class of data and level of personalization never seen before in consumer health and fitness technology. I believe that Nix is leading this new wave of innovation — and providing directly actionable data – and that’s why I’m so excited to be a part of their amazing team.”

Nix’s first product, the Hydration Biosensor, is a small patch that analyzes athletes’ sweat in real-time, telling them when, what, and how much to drink, quantifying fluid and electrolyte losses, and more. Nix plans to launch additional biosensors, designed specifically for team sports, military and labor applications, in 2023.

Other recent hires include Pratik Patel, Nix’s Director of Human Performance and former Director of Performance Nutrition and Assistant Strength & Conditioning Coach for the New York Giants; Inga Stenta, Nix’s Chief Marketing Officer and former Head of US Marketing at Reebok, and Tom Fowler, one of Nix’s many advisors and former president of Polar. See Nix’s full team here.

Nix is redefining how we manage health by developing biosensors that empower consumers to access, understand, and act on their personal biology at home. Nix’s first consumer product is a sweat patch that provides athletes, soldiers, and laborers with hydration data in real-time, helping them optimize safety and performance. Headquartered in Boston, Mass., Nix is led by Founder and CEO Meridith Cass, a graduate of Harvard Business School, former VC, and 9-time marathoner. Advisors include Tom Fowler, Former President of Polar; Dr. Bob Murray, Founder and former Director of the Gatorade Sports Science Institute, and Tatyana McFadden, the 5x Olympian and 17x Medalist. Learn more at nixbiosensors.com.