Cyclists from 70 countries competed for the GFNY Championship crown 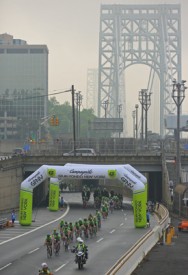 Camila Cortes Severino (COL) and Oscar Tovar (Colombia) are the 2015 GFNY Champions; Thousands of cyclists from around the globe took on the 100 mile cycling marathon

Five thousand cyclists from 70 countries and 48 states were treated to perfect weather and a great atmosphere today at the Fifth Annual Campagnolo Gran Fondo New York (GFNY) and inaugural GFNY Championship. The race, modeled after the popular and challenging Gran Fondo cycling marathon that originated in Italy, is now in its fifth season and has drawn elite cyclists as well as competitive amateurs who test their skills on a 50 or 100-mile course. GFNY is one of the largest competitive cycling events in the world, boasting world’s most international peloton.

“GFNY has become globally recognized as a quality brand in competitive cycling. We are thrilled that this year’s event again drew so much global and local interest,” said GFNY President Lidia Fluhme.

Riders began the race at 7am on world’s busiest bridge, George Washington Bridge, and then traveled through scenic New York and New Jersey via the beautiful Bear Mountain State Park, before concluding in the local cycling hotspot, Fort Lee, NJ.

Located directly across from the George Washington Bridge, Fort Lee, NJ is fast becoming a cycling hub in the region.

“Fort Lee is thrilled to host the race finish and festivities and to welcome riders, near and far to celebrate their hard-earned achievement in our town,” said Fort Lee Mayor Mark Sokolich. “Cycling has become part of Fort Lee’s culture and events like GFNY are economic drivers for our communities and local businesses.”

As riders were welcomed across the finish line, festivities continued up the road at PIP Park, where participants and spectators relaxed and recovered with food and drinks.

Campagnolo GFNY continued its partnership for the fourth year with Operation Smile, an international children’s medical charity that provides funding for essential medical procedures that help children born with facial deformities in over 60 countries. Operation Smile is the official charity of the 2015 Campagnolo GFNY.

The 5th annual Campagnolo Gran Fondo New York on May 17, 2015 was the first GFNY Championship. The race features the world’s most international peloton with riders from over 70 countries and 48 US states. Athletes will take on a challenging 100-mile route from NYC to Bear Mountain and back to compete against each other, the clock and themselves in a personal endurance challenge.