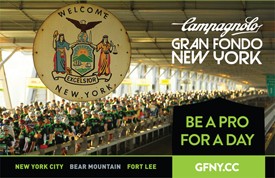 Thousands of cyclists to compete on 100- and 50-mile race courses through scenic NY and NJ; The best racers of GFNY will be crowned at the inaugural GFNY Championship; Fifth Annual NYC Bike Expo welcomes visitors May 15-16

“The New York-New Jersey area offers cyclists a challenging, dramatic and scenic racing experience building on the already thriving cycling culture in the metropolitan area,” said Lidia Fluhme, co-organizer of Campagnolo Gran Fondo New York. “GFNY has become globally recognized as a quality brand in competitive cycling. We are very excited to draw so much global and local interest.”

The cache of the “New York” in “Gran Fondo New York” has driven interest in the six races of the 2014/15 GFNY World cycling series and attracted international cyclists to come check out the flagship event in the New York-New Jersey area.

Last year’s top finisher, Gabriel Corredor from Colombia, is returning to defend his crown. He will be joined by elite racers from around the world, as well as avid amateurs like former New York Giant Amani Toomer. The race draws a spectrum of enthusiasts including CEOs, firefighters, teachers, persons with disabilities and many others passionate about the sport and the experience of riding the challenging and scenic course that traverses New York and New Jersey towns.

“GFNY is a great opportunity to stay fit and to challenge myself, especially on the hills,” said Amani Toomer, former New York Giants receiver. “The GFNY pre-race practice rides and the race itself offer a great deal of camaraderie and a great environment for cyclists.”

Three New York City elite racers Gavi Epstein, Dan Chabanov and Mike Margarite have set out this year to keep the crown in town for the first time.

“I’m thrilled and excited for my New York City home coming return and my participation in Campagnolo Gran Fondo New York. My passion and cycling skills was developed riding in Central Park and on the streets of Manhattan. I hope that competitive cycling continues to take more of a foothold in the Big Apple. It’s a great recreational sport for all ages. I look forward to the challenge and thrills that this race has to offer,” said Nelson Vails, Harlem NYC native and 1984 Olympic silver medalist in Cycling.

Gearing Up for Race Day

The challenging and scenic 100-mile race takes place the morning of Sunday, May 17th. Riders will begin on the New York City side of the iconic George Washington Bridge at 7 a.m. and wind through the course in New Jersey and New York State that extends up to New York’s Bear Mountain State Park, with the finish line in Fort Lee, NJ (see photo of Fort Lee finish ribbon-cutting with Mayor Mark Sokolich below).

“Fort Lee is thrilled to host the race finish and to welcome riders from near and far to celebrate their hard-earned achievements in our town,” said Fort Lee Mayor Mark Sokolich. “Cycling has become part of Fort Lee’s culture and events like GFNY are economic drivers for our communities and local businesses.”

Cyclists also have the option of partaking in the 50-mile GFNY BEAR on the same day, a non-competitive ride starting at the George Washington Bridge and finishing on Bear Mountain. Many cyclists use the GFNY BEAR as a stepping-stone towards completing the 100-mile Campagnolo GFNY in the future.

“We recognize that it is a privilege to stage an event of this magnitude in the New York-New Jersey metropolitan area,” said Uli Fluhme, co-organizer of Campagnolo Gran Fondo New York. “The extraordinary effort and support of the municipalities along the route, the various government agencies in New York and New Jersey, and especially local police forces managing the safety aspect for riders and spectators, truly makes this event a success.”

The course highlight is the scenic and rigorous Bear Mountain. Riders will get a boost from cheering spectators in the Rockland County and Alpine County towns that the course travels through. The event draws enthusiastic supporters along the route, especially with many local cyclists from the tri-state area participating in GFNY to fundraise for local charities.

In addition to the race, the Fifth Annual NYC Bike Expo will take place on May 15-16 from 11am-8pm at Penn Pavilion on 33rd Street and 7th Avenue. Race sponsors along with other vendors in the food, energy, and automotive sectors (among others), will be on hand to showcase their latest products. The expo is a stand-alone event organized by GFNY that is open to the public and draws thousands of visitors. Attendance is expected to surpass 10,000 individuals.

The 5th annual Campagnolo Gran Fondo New York on May 17, 2015 will be the first GFNY Championship. The race features the world’s most international peloton with riders from over 70 countries and 48 US states. Athletes will take on a challenging 100-mile route from NYC to Bear Mountain and back to compete against each other, the clock and themselves in a personal endurance challenge.

Further material for your use