City on the Lakes Tri Festival to replace Timberman Triathlon 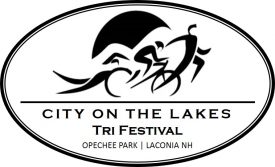 Triathletes and supporters, disappointed to lose the annual Timberman Triathlon event in Gilford, NH, will be able to compete in a brand new “City on the Lakes Tri Festival”, comprising a Sprint and 70.3 (Half-Iron) distance triathlon, scheduled for the weekend of 12-13 August 2017, at Opechee Park in Laconia NH. The Timberman Triathlon was cancelled late last year by the World Triathlon Corporation (Ironman) due to potential local scheduling conflicts and increased concerns regarding operational execution.

The Laconia City Council on Monday night (3/13/2017) approved an application by Jan Buitendag, of Tritanium Sports, a Gilford based company that specializes in staging sporting events, to stage a Triathlon at the Opechee Park recreation area in Laconia NH, as a replacement for the cancelled Timberman.

After the cancellation of the Timberman Triathlon, Buitendag (Event Producer) and Jana Loughlin (Race Director) of Tritanium Sports, decided to step in to keep the triathlon tradition going in the Lakes Region and to fill the void left by the Timberman cancellation. Buitendag was involved in the Timberman and Mooseman triathlons since their inception as a sub-contractor and planner, for Keith Jordan, till they were sold by Jordan to the World Triathlon Corporation (Ironman).

Ellacoya Park, in Gilford, where the Timberman Triathlon use to be staged is no longer available for sporting events during the summer months, and a new venue with new swim, bike and run routes had to be found:

“I always thought that Opechee Park is the ideal Triathlon venue and I am very pleased that the Laconia authorities approved the application. We are going to stage a world class Triathlon event at Opechee and surrounding areas. We must get away from the idea that only big international- and national companies can organize a successful Triathlon. The history of Triathlons in the Lakes Region has proven that we do not need those big companies to stage a successful Triathlon. We are excited to return to our roots by staging the City on the Lakes Tri Festival – an event organized by locals and supported by locals for all triathletes and their supporters.” said Buitendag.

The local recreational WOW Trail project will be a beneficiary of the event and will receive 20% of the profits made.

Buitendag further said that they would like to welcome back all former Timberman participants, volunteers, partners and sponsors.

View all Releases by Jana