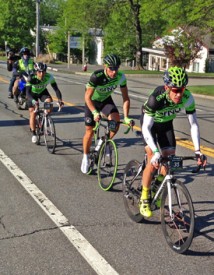 With the distinction between amateur and professional cyclists continuing to blur, the exclusion of pros at Campagnolo Gran Fondo New York is no longer justifiable.

NEW YORK CITY, September 24, 2014 – The 5th annual Campagnolo Gran Fondo New York (GFNY) held on May 17, 2015 is now open to athletes holding a professional cycling license. In the first four years the race was only open to amateurs and ex-professionals that had been retired from their pro racing careers for five years or more.

“Twenty years ago a rider holding a pro license was a professional who 100% earned his living from racing bikes”, says GFNY Race Director Uli Fluhme. “With the emergence of the lower category pro licenses in the 90s, former Elite Amateurs turned into professional cycling license holders. Now, 20 years later, many Continental Pros have to keep day jobs to support their cycling.”

“At the same time, opportunities to race long road races have decreased as races cease to exist due to rising public costs. I’ve spoken to several pros who said they had to get ready for a stage race by entering criterium races which were wholly inadequate preparation. Consequently, many riders at the second tier pro level decide not to hold a pro license to be able to pursue their passion for long distance road bike racing. Hence, we can’t justify denying access to GFNY based on the racing category athletes choose. And because it’s impossible to check everyone’s working status to determine who is an amateur and who isn’t, we will simply open up GFNY equally to anyone who is 18 years or older.”

The best known open race is the Ötztaler Radmarathon with a sold-out 4,000 rider peloton tackling 238k with 5,200m of climbing through the Austrian and Italian alps. Furthermore, amateurs and professionals regularly toe the line together in running and triathlon. Cycling is different in that it evolved into a team sport on the highest level after the second world war. And with that, team cars entered the peloton. “While GFNY is open to teams, team cars or individual follow cars are not allowed because they would make the race unfair,” adds GFNY President Lidia Fluhme. “Our focus will always be on providing a great experience for every rider whether he/she is competing for the win, a personal best or trying to beat the cut-off time. Take the TCS NYC Marathon: it wouldn’t be the amazing race it is without the Elite runners but it wouldn’t even exist without the committed amateur runner.”

The 5th annual Campagnolo Gran Fondo New York on May 17, 2015 will be the first GFNY Championship. The race features the world’s most international peloton with riders from over 70 countries and 48 US states. Athletes will take on a challenging 100-mile route from NYC to Bear Mountain and back to compete against each other, the clock and themselves in a personal endurance challenge. The 50-mile GFNY BEAR on the same day is a non-competitive ride from NYC to Bear Mountain. New for the 2014-2015 season, GFNY WORLD features events in Italy, Mexico, Puerto Rico, Colombia, Spain and France. Campagnolo Gran Fondo New York raises funds for Operation Smile, the international children’s medical charity. The official Grand Fondo New York website is: granfondony.com.